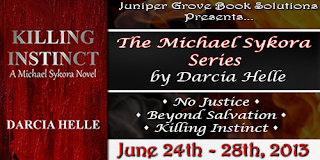 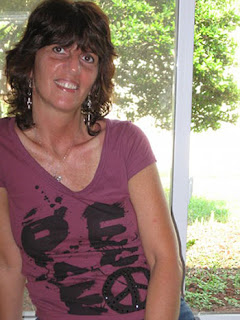 Darcia Helle lives in a fictional world with a husband who is sometimes real. Their house is ruled by spoiled dogs and cats and the occasional dust bunny.
Suspense, random blood spatter and mismatched socks consume Darcia’s days. She writes because the characters trespassing through her mind leave her no alternative. Only then are the voices free to haunt someone else’s mind. 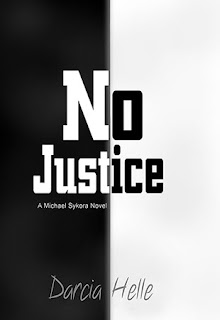 How far would you go to right a wrong?
For Michael Sykora, killing started as blind rage. Then it became something he’s good at. To most of those who know him, Michael is a software designer, a smart but average guy with a workaholic nature. To a chosen few, Michael is a part-time hit man whose specialty is eliminating hard-core criminals.
Michael has managed to keep his two personas separate. Until now. When Nicki, a close friend, gets into trouble, Michael steps in to help. Having lost his fiancé to a brutal crime, Michael will do whatever necessary to keep from losing another woman in his life.
At one time or another, don’t we all wish we could do the things our Justice system cannot or will not? What would it take to push you over the edge?

My Review:
This is so far out of my normal books that I read but with that said I am so glad I got to asked to review this book. I look forward to reading more of this series.

I loved how this book is told from the killer’s perspective. I have never read a book like that before. I also thought I would never find myself rooting for a killer but with Michael I did just that. I kept hoping he would find all the bad guys. The suspense of this book literally had me on the edge of my seat the whole time. I know you might think rooting for the killer is bad and makes him no better then the people he is killing but the love he has for his friends and the people he cares about, coupled with the fact that yes Michael does in deed have a conscience makes him more human to me.

Before you decide that Michael’s a bad guy keep in mind, what would you do to protect a loved one, would you kill for them or just let the system fail them? 4/5 Bloody Fangs 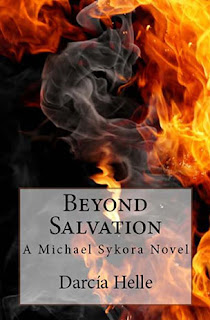 A teenage runaway disappears from the streets. The only people that care, or even notice, are her two best friends who are also runaways. For reasons of their own, they can’t go to the police for help.
They seek out Michael Sykora, a software designer by day and hit man by night. Known on the streets as The Ghost, Michael has a reputation for taking on the twisted criminals. Rapists. Child molesters. He has never been hired to find the lost. Until now.
Michael teams up with ex-prostitute Nicki and full-time hit man Sean. Together they bend the rules of the justice system in order to find a young girl few people care about. In the process, they uncover a world where salvation comes with a price tag and God’s words are used to incite fear in a congregation of believers. 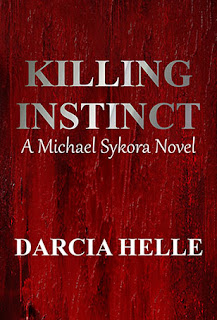 Sandman built his dubious reputation by turning the dreams and nightmares of others into harsh reality. Now he’s pursuing his own twisted dream; the beautiful Maria Milan. But she doesn’t want to become a player in Sandman’s sordid fantasy.

Michael Sykora is a hit man who kills for justice. Sean Riley is a hit man born to kill. Together, they’re out to take down Sandman and his organization. Whether mercy is given depends on who catches him first.

Excerpt:
Sean Riley looked down at the woman he’d been hired to kill. Even before he’d partnered with Michael Sykora and tamed his deadly skills, he’d disliked killing women. Back then, he’d probably have turned down this job. Not that he’d have altered the outcome. Someone else always stood next in line, wanting the money and willing to kill for it.
Even sleeping, with her jet-black hair scattered across the pillow and a drop of drool slipping from the corner of her mouth, her beauty took his breath away. This woman, whose name was Maria , should be dead by now. Jake, the man who’d paid for her murder, wanted her to die slowly. To suffer. Jake had specified the use of a knife, keeping the plunges slow and only deep enough to shatter her nervous system. Keep her alive until the last possible moment.
Jake did not have balls enough to do it himself.
He wanted photos. A recording of her screams. He’d asked for video, as if Sean was a slice-and-dice movie producer instead of a high-priced hit man.
Sean stood in the shadows of the bedroom, watching Maria sleep. He’d done the unthinkable. For the first time in his long, restless and oddly successful career, he’d had sex with the intended victim. More than that. He’d gotten involved. He’d fallen for this woman who’d been marked to endure excruciating horrors at his own hands.
He shifted in the darkness, wishing he could crawl back under the sheet. He already missed the feel of her skin pressed against his own. With a quiet sigh, he tugged his pants on. He had a job to do.
Fully dressed, he gazed back at Maria. The moonlight fell across her face. She didn’t stir. Her beauty glowed. He knew things about her now. And she knew things about him. They’d become tangled in ways he hadn’t expected.
Sean went out to the kitchen and grabbed the backpack he’d left by the door. He flipped the light on, squinting at the brightness. When his eyes adjusted, he checked the contents. One roll of heavy duct tape. A few small towels for use as gags. Rope. Zip ties. A full syringe. His Black Ops knife. He fingered the metal, thought about the meaning of what he needed to do. What he might not have done a year ago. What it would all mean to him, to his future. To Maria.
He stepped back into the bedroom. Maria had rolled onto her side. Her hair spilled over her cheek. The sheet fell away, exposing flesh he’d lingered over not long ago. A smile played on his lips. He’d enjoy this job, this killing, more than anyone had a right to.
With a last look over his shoulder, he left Maria behind and headed out to his car.

What did you find to be the easiest part of writing this series? The most difficult?

The easiest part for me with any book is always the opening scenes. When the characters first pop into my head and their stories begin to unfold, the writing happens on its own. Not writing them down would be an impossible feat, because the characters simply won’t leave me alone. My mind becomes their playground, and I have no peace until the story is complete.
With this series specifically, the easiest part was the characters. Michael Sykora came to me in the midst of a conversation with my husband. Over the course of a few weeks, his character became fully formed in my mind. Then, when I sat down to write No Justice, the first book, all the other characters popped in as needed. When I got to a scene where a new character was necessary for the story, I didn’t even have to think about who that character was. It was as if they’d been hanging out in the shadows of my mind, just waiting for the opportunity to join in.
The most challenging part of writing this series came mostly in Killing Instinct. I never write from an outline. For me, writing always began with characters. Plots unfolded as I came to know the characters and their stories. Series writing demands a different approach, since the characters are already established. With Beyond Salvation, book #2, this wasn’t as much of a problem. That plot popped into my head before I’d finished No Justice, so I already knew where the characters were going next. When I sat down to write Killing Instinct, I found myself deadlocked. I knew the characters too well, which meant I couldn’t rely on my usual method of exploring the characters to find the story. I also couldn’t sit down and outline a plot. That simply doesn’t work for me. I knew I needed a fresh angle; I just didn’t know what that angle was.
As I mulled this over, other characters with their own unrelated stories popped into my head. I moved away from the series, writing several stand-alone novels. Michael Sykora remained in the back of my mind, waiting for me to return. Then one day Sean Riley, Michael’s partner, popped into my head and I wrote what turned out to be the first chapter of Killing Instinct. I realized I’d found my new angle in Sean’s story. As always, I wasn’t sure what the plot was. But that didn’t matter anymore, because I knew Sean would lead me there.

a Rafflecopter giveaway
Posted by Sabrina's Paranormal Palace at 1:49 AM