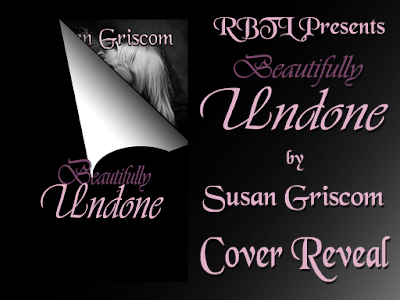 Read more »
Posted by Sabrina's Paranormal Palace at 7:10 AM No comments:

Today on my blog I have The Reaper's Fall blog tour. On my stop there is a spotlight, excerpt, and giveaway. 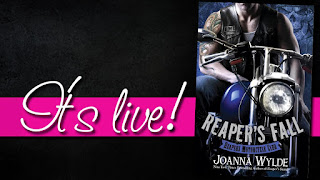 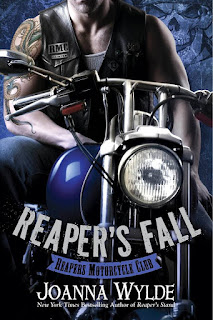 He never meant to hurt her.

Levi “Painter” Brooks was nothing before he joined the Reapers motorcycle club. The day he patched in, they became his brothers and his life. All they asked in return was a strong arm and unconditional loyalty—a loyalty that’s tested when he’s caught and sentenced to prison for a crime committed on their behalf.

Melanie Tucker may have had a rough start, but along the way she’s learned to fight for her future. She’s escaped from hell and started a new life, yet every night she dreams of a biker whose touch she can’t forget. It all started out so innocently—just a series of letters to a lonely man in prison. Friendly. Harmless. Safe.

Now Painter Brooks is coming home… and Melanie’s about to learn that there’s no room for innocence in the Reapers MC.

Excerpt:
Excerpt #1 (New to tour)
“You want to watch a movie or something?” she asked, nodding toward the TV. I had a decent one, too. Giant-ass flat-screen—homecoming present from the club.
“Sure,” I said, reaching for the remote. I didn’t have cable, but Ruger had set up some kind of box thingie for me so I could stream shit. “Whatcha in the mood for?”
“Not horror,” she said quickly, and I laughed again, remembering that first evening I’d spent with her at Pic’s house. She’d been so young and scared and vulnerable . . . I’d wanted to eat her up.
I still wanted to eat her.
“I can’t believe that you and Puck were supposed to be watching over me, and then you put in a slasher movie. That’s not how you make a girl feel safe.”
“No horror,” I agreed, although the thought of holding her for a couple hours while she was scared shitless appealed way more than it should. Watch it, asshole. “How about Star Wars?”
“You like Star Wars?”
I shrugged. “Everyone likes Star Wars. You know, I’m pretty damned sure Han Solo was a biker.”
She giggled. “You mean, like a space biker?”
“See, when you say it like that it sounds stupid.”
“I wanted to be Princess Leia. She’s badass,” she said, taking a deep drink of her beer. I watched as her lips wrapped around the neck, her throat swallowing. Oh fuck, that was good. She set the beer down on the coffee table with a clink, then let loose with the biggest burp I’d ever heard.
“Fucking hell,” I said, stunned. “I didn’t think girls could burp like that. Shit. Impressive, Mel. Very impressive.”
She grinned at me.
“We’re friends,” she told me. “And friends don’t need to worry about stuff like that. Let me guess—you’ve never had a female friend before?”
“Not really,” I admitted. “I’m think I’m a little scared.”
Scared and turned on, which was weird.
“You should be. I can do the whole alphabet.”
Damn. I kinda wanted to see that.

Excerpt #3
“You’re not going back to the party.”
She cocked her head, and I saw the confusion in her alcohol- glazed eyes as she wrinkled her nose at me. All cute, like a rabbit.
“You look like a bunny.”
“You look like an ax murder,” she said, frowning. “And I thought London was looking for me. Aren’t we going the wrong way?”
“I lied. I do that a lot,” I told her, staring at her lips. I reached out, catching her chin in my hand, running my thumb across her lips. Our eyes locked, and I don’t know if her pulse started to rise but mine sure as fuck did. What the hell had I been thinking, writing to this girl? She was so pretty and perfect and had this amazing, magical life just waiting for her and all I could think about was dragging her down into the dirt and shoving my cock into every hole she had.
She’d scream while I did it, too, the same sweet screams that played in my head every night while I jacked off.
I hated myself.
“Why did you lie?” she asked, her voice a whisper.
“To get you away from Taz. It’s not safe with him.”
Mel’s forehead creased in confusion, her brain moving so slowly I could practically see the wheels turning behind her eyes. She might be smart as fuck most of the time, but she’d transitioned to drunker than fuck tonight. Kit. Kit and Em. They’d done this to her.
I leaned in closer, catching her scent. For an instant I swayed, so tempted . . .
“They told me all about you,” she whispered.
“Who?”
“The other girls. Kit, Em. Jessica. I know how you operate,” she continued. One of her hands rose, touching my chest. Fire burst through me, because if I’d wanted her before I was desperate for her now. She was so soft, so sweet . . . so perfect.
Then her words sank in.
“What did you just say?”
“They told me all about you,” she said, eyes dropping to stare at  my lips. “They told me you have a Madonna-whore complex.” I froze.
“A what?”
“A Madonna-whore complex,” she repeated, her voice earnest. “You like to screw dirty girls and you put clean girls on pedestals, where they can stay perfect and pure. That’s pretty messed up, Painter. There’s no such thing as Madonnas and whores. We’re all just people.”
The words stunned me. What the hell was she talking about? Just because I didn’t want her dragged down in the drama and bullshit of this life didn’t mean I had some sort of fucking complex. And who the hell were the Hayes sisters to have an opinion? I couldn’t tell what pissed me off more—the fact that they’d talked to Mel about me or that they hadn’t done a better job of scaring her off.
She wasn’t supposed to be here.
“Kit and Em are crazy, and that friend of yours—Jessica? She’s like a car crash. You don’t belong here, Mel.”
“And where do I belong?”
“With some nice kid who’ll treat you like a queen and work his ass off to give you everything perfect for the rest of your life.” The words were practically a growl.
Her eyes widened.
“What if I don’t want perfect?”
“Too fucking bad, because that’s what you’re getting.” 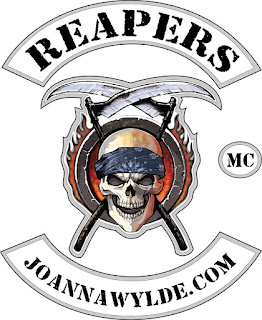 Joanna Wylde is a New York Times bestselling author and creator of the Reapers Motorcycle Club series. She currently lives in Idaho.

Thank you for stopping by my blog today. I would also like to say Thank You to TRSOR Promotions for letting me participate in this blog tour. Don't forget to enter the giveaway below.
~Sabrina

a Rafflecopter giveaway
Posted by Sabrina's Paranormal Palace at 12:13 AM No comments: 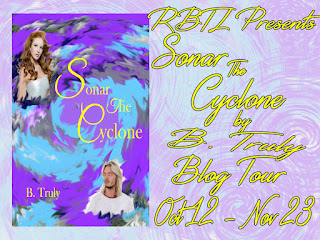 Today on my blog I have the Sonar The Cycle blog tour. On my stop there is a spotlight, chapter 5, cocktails & characters guest post, and giveaway. 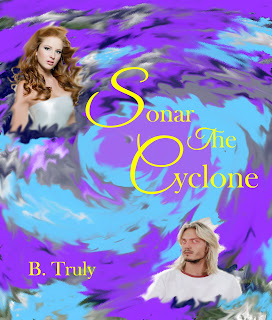 Title: Sonar the Cyclone
Author: B Truly
Series: The Sonar Series (2)
Genre: New Adult, Paranormal, Romance, SciFi
Publisher: Self Published
Release Date: July 3 2015
Edition/Formats Available In: eBook & Print
Blurb/Synopsis:
Is your destiny determined by what the future has foretold? Or is fate deemed in the hands of what you behold?

The Royal 4 are now back on their home territory of Nazari, determined to get things back to normal. Syira’s forbidden love is being held captive. She is hell-bent on fighting for him despite the immense obstacles. She must find a way to convince her race that Kadeem is not dangerous. Their threat lies from deeper within.
Shiray has accepted her past and is moving forward with her life, but it comes back to haunt her tenfold. That all changes when she stumbles across the truth. Now, she must pick up the pieces of her shattered life.
They are in the calm but know when they approach the dirty side of the Cyclone storm, terrible things will unravel. The future is revealed and they get a glimpse of Fate’s course. Time is not on their side. They must attempt to change their destiny or their world will be doomed.


When Kadeem told me he loved me, it was the happiest moment of my life. Could our love last forever? I couldn’t cope if something ever happened to him. I would die for this Polar, and I had to have faith that love this powerful was meant to be. I didn’t want to ruin tonight thinking about the consequences my decision would lead to. Now, I would live in the moment, because it was all I had to keep me sane.


Cocktails & Characters (for the main characters)
Choose 2 or 3 of your characters tell us what their favorite cocktail is and why.

On Kadan, there’s no need for fermentation. The berries are potent with natural liquor that comes straight from the berry. The berries are picked off the bushes from varieties of sweet and tart, to tangy and bitter. They are mixed with yeast and hops, or various different fruit flavors to enhance the taste.


This cocktail is a combination of the potent Milasion berry and Bonnet berry. The berries are mixed together with pineapple and grape juices. This makes for the ultimate taste.

Make sure you check out The Book Quarry on November 20 for chapter 6 of this book. 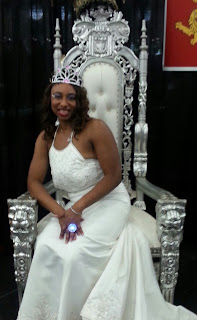 I have wanted to be an author since I was fifteen years old and grateful to have accomplished this dream. I have three wonderful children and a husband who defines the person I am today. I work full-time as an Ultrasound technologist in Sugarland, Texas.

I have very vivid dreams and a wild imagination. I like to read, watch tons of TV shows, and movies. I’m addicted to romance and get a thrill out of action and suspense. I write New Adult Fantasy, Sci-fi, and Paranormal-Romance.

In the Sonar series it was fun to explore different elements of Sci-fi romance and create various realms of powers for my characters. I want to show my readers that Sci-fi can be fun, but also traumatic. I hope you guys enjoy the Sonar Series.

Other Works by B Truly

Thanks for stopping by my blog today. I would also like to say Thank You to B Truly for the chapter & guest post and say Thank You to RBTL for letting me participate in this blog tour. Don't forget to enter the giveaway below.
~Sabrina
a Rafflecopter giveaway
Posted by Sabrina's Paranormal Palace at 12:19 AM 2 comments: