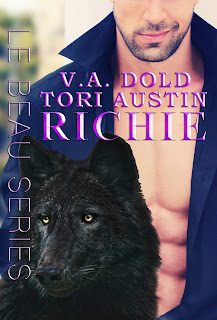 Four years ago, Richie met a group of Tulane freshmen when he saved one of them from a mugger.

Now the first of their menagerie is getting married.

Surprise of all surprises, Richie meets his mate, Piper, at the wedding in Missouri, of all places.

He didn’t expect her to be a bounty hunter or that her murderous prey had turned the tables and she was now the hunted.

Can Richie save her from the death he foresaw in a premonition?

Injuries are mounting and time is running out. 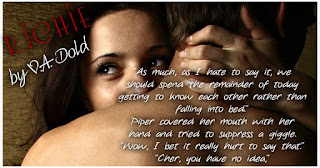 As quietly as possible he slipped in and searched for an open seat. A hasty scan of the room showed only one vacant chair. Great, obviously he was the last person to arrive. Without causing too much disturbance, he walked to the front of the room and took his seat between Billie and Karen.
Piper’s gaze had swung to the double doors the instant they cracked open. She scrutinized the man slipping in. A relieved breath escaped the instant she got a good look at him, and verified it wasn’t Qball crashing the dinner. But for some reason, the stranger raised a flock of birds in her stomach. She never reacted to strangers so strongly.
She didn’t dare look too closely. The last thing she needed was this guy catching her gawking at him. Her aunt always said she started flirting the instant she left the womb. Flirting, my ass, she thought, shaking her head to herself. Her aunt never could tell the difference between profiling and flirting. She’d been profiling people her entire life. That was one of the reasons she’d gone into her chosen profession.

Experience taught her the best way to guard her heart was to thoroughly study the enemy and be prepared. And that was what she intended to do.
Too many of the opposite sex came armed with charm and playful banter. The problem was, most of the time the guy was faking it to get into the girl’s pants. But this guy looked like no one she’d ever seen. For some reason he didn’t fit her normal profile.
She glanced his way out of the corner of her eye as he took the empty chair at her table. His manicured five o’clock shadowed jaw was well defined and he had perfectly sculpted lips. But it was his eyes that captured her attention, a warm brown color with flecks of gold. To complete her assessment, she forced her gaze from his face.
Nice, he had a head of gorgeous dark brown hair. It wasn’t long by any means, just long enough to sink her fingers into. Where the hell did that come from?
Richie was relieved to see Helen, Karen and Billie were seated at his table. Thank Goddess, he had someone to talk to. He smiled brightly and was nodding his hellos when a delectable scent tickled his nose. He smelled the most mouthwatering crawfish boil - ever. He glanced at the woman across the round table, his breath hitched, and his heart constricted. Holding her gaze, his nostrils flared as he breathed her in.
MATE!

Her eyes widened and she quickly looked around. She must have heard him telepathically and was searching for someone near who may have spoken. Odds were she didn’t understand what she’d experienced and was suspicious.
Frowning, she turned her attention back to the table. Then she caught herself and carefully straightened her napkin in her lap while she fixed a pleasant smile on her face. Satisfied she managed to appear outwardly calm, she glanced up and froze.
For the first time, she took in his entire face, where before she’d been analyzing each feature separately. The man who joined the table right before she swore she heard a voice in her head was gorgeous. Not just hot, but please God, let me strip him naked and lick him, gorgeous.
He must be an actor or a model. She racked her brain, but she couldn’t remember her cousin, Bob, ever saying he knew someone famous.

Review:
I have read all these books and loved them. But I do recommend starting with book one as you get the back story of all the characters. They are all fun and sexy to read. Richie is a great character and I loved his mate. I love when shifters mate with humans and they have to explain what it means to be mated. I can't wait for the next book in this series. 4/5 Bloody Fangs 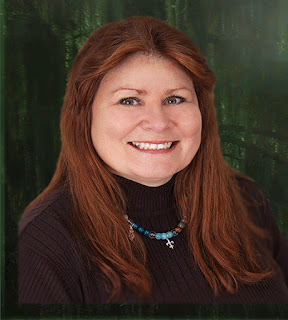 Prior to becoming a full-time writer, she was a publicist for authors.

Her idea of absolute heaven is a day in the French Quarter with her computer, her coffee mug, and the Brothers, of course. Or a night with a sexy cowboy in the hayloft.

A Midwest native, with her heart lost to Louisiana & Texas. She has a penchant for titillating tales featuring sexy men and strong women. When she's not writing, she's probably taking in a movie, reading, or traveling. Oh, and there is the distinct possibility she is out cowboy hunting. 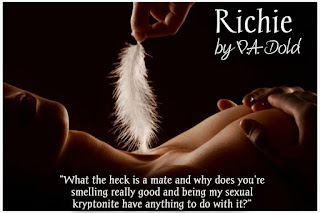 Thank you for stopping by my blog today. I would also like to say Thank You to VA Dold for letting me review your book and for participating in this blog tour.
~Sabrina
Posted by Sabrina's Paranormal Palace at 12:18 AM 1 comment: 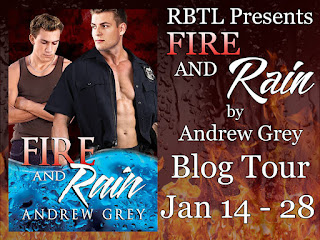 Today on my blog I have the Fire and Rain blog tour. On my stop there is a spotlight, excerpt, and giveaway. 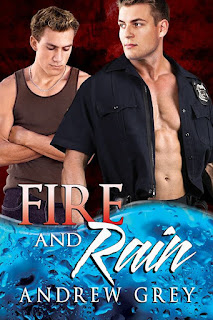 Title: Fire and Rain
Author: Andrew Grey
Series: Carlisle Cops #3
Genre:  M/M Contemporary Romance
Publisher: Dreamspinner Press
Release Date: Jan 11 2016
Edition/Formats Available In: eBook & Print
Blurb/Synopsis:
Since the death of their mother, Josten Applewhite has done what he’s had to do to take care of his little brother and keep their small family together. But in an instant, a stroke of bad luck tears down what little home he’s managed to build, and Joss and Isaac end up on the streets.
That’s were Officer Kip Rogers finds them, and even though he knows he should let the proper authorities handle things, he cannot find it in his heart to turn them away, going so far as to invite them to stay in his home until they get back on their feet. With the help of Kip and his friends, Joss starts to rebuild his life. But experience has taught him nothing comes for free, and the generosity seems too good to be true—just like everything about Kip.

Kip knows he’s falling hard for Joss, and he likes the way Joss and (brother) make his big house feel like a home. But their arrangement can’t be permanent, not with Joss set on making his own way. Then a distant relative emerges, determined to destroy Joss’s family, and Kip knows Joss needs him—even if he’s not ready to admit it. 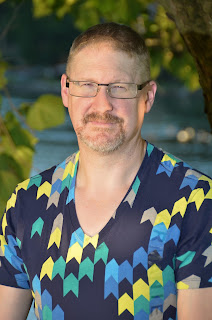 Andrew grew up in western Michigan with a father who loved to tell stories and a mother who loved to read them. Since then he has lived throughout the country and traveled throughout the world. He has a master’s degree from the University of Wisconsin-Milwaukee and works in information systems for a large corporation.
Andrew’s hobbies include collecting antiques, gardening, and leaving his dirty dishes anywhere but in the sink (particularly when writing)  He considers himself blessed with an accepting family, fantastic friends, and the world’s most supportive and loving partner. Andrew currently lives in beautiful, historic Carlisle, Pennsylvania.

Thank you for stopping by my blog today. I would also like to say Thank You to RBTL for letting me participate in this blog tour. Don't forget to enter the giveaway below.
~Sabrina
a Rafflecopter giveaway
Posted by Sabrina's Paranormal Palace at 12:12 AM 1 comment: