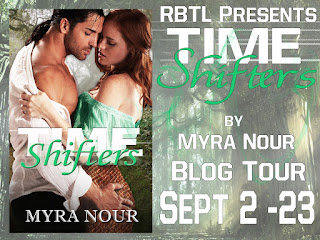 Today on my blog I have the Time Shifters blog tour. On my stop there is a spotlight, review, and excerpt. 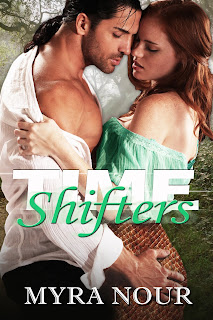 Title: Time Shifters
Author: Myra Nour
Series: Standalone
Genre: Paranormal Romance w/ Time Travel Elements
Publisher: Self-Published
Release Date: May 1 2015
Edition/Synopsis: eBook
Blurb/Synopsis:
Briana has heard his voice for years in dreams. Calling to her. She hears that same voice in the handsome stranger she meets on vacation. Captivating and so familiar. When he unexpectedly transforms into a werewolf, Briana flees in horror. She knows him … he is the wolfman who haunts her dreams. More than anything else, it is her lustful response to the beast that terrifies her.


When Raynor finally meets his mate, he is confused by her reaction and even more so by her response when he shifts. She doesn't recognize him. In an attempt to escape, Briana jumps through the time portal of his people, landing her in Medieval England. Raynor must rescue her, which requires bonding with Briana as her mate. But first he must teach Briana that she is a shifter, then convince her not to be repelled by her other self, an ancient, powerful shifter. A snakewoman.

Excerpt:
“Oh,” she groaned aloud. There he was again, the dark mysterious figure that haunted her more nights than she cared to count. This time, they stood facing each other in the middle of a night-black forest; she was already frightened, her breathing frenzied and her heart pounding. She felt like she was caught in the middle of a Twilight Zone episode—death approached, but it was as if she were stuck in quagmire and couldn’t move.
He edged closer, stepped into the moonlit glade between her and the protective foliage that had covered his form. A werewolf! Briana was shocked. Even though she was a strong person, she was too scared to move an inch. She’d expected a menacing stranger, not a fictional monster. He looked real enough, his body bulky with muscles, and she even noticed a musky odor.
Abruptly, the creature jumped in one great predatory leap, landing directly in front of her. His weight crashed a small branch into kindling as he landed. Strangely, she wasn’t frightened, not now. Why? She didn’t know. Her heart thudded heavily against her chest, her breathing came out in short pants, but from another source entirely—she was turned on. Briana found this startling. The appearance of a savage, beast-like wolfman made her hot? It was insane, this sudden switch from terror to lust.
For years, she had been involved in strange encounters with this mystery man, who tonight, had turned out to be a nightmarish creature. But this was turning into the weirdest experience she’d ever had. Once he had made his appearance in wolf/human form, she no longer feared his presence. It was as if there was a connection between them, a hidden knowledge she found puzzling.
“Who are you?”
His answer was a guttural growl, then a pounce onto her body. She fell to the ground, landing uninjured on a soft pile of leaves. For some crazy reason, she knew he did not intend to hurt her. The beast’s body was heavy, his long hair tickling against her exposed skin. She glanced down at her naked body, again surprised; she’d been wearing her nightgown earlier.
Drool dripped onto her chin and she looked up into its beautiful, but eerie golden eyes, strangely unaffected by the savage grin of its fanged mouth. She still wasn’t frightened.

I was a little nervous when I read that this deals with time travel and shifters but I had nothing to worry about. Myra delivers orignal take on shifter books that had me loving this book from page one. There is everything you want in a shifter book. It has passion, danger, action, and super steamy sexy scenes then you add in an amazing story with great characters and you will be hooked just like I was. I am definitely going to be reading more from this author in the future. 4/5 Bloody Fangs

Myra has published 14 books with Ellora's Cave & New Concepts Publishing. She enjoys writing romances with paranormal, fantasy & S/F elements, creating believable characters, and is known for her vivid imagination. Recently she has been writing horror; one short story was published by Undead Press in the House of Terror anthology.
Since 2012 she started Book & Trailer Showcase with her husband Simon. She is CEO of the company and BTS Book Reviews Magazine. Her EC novels have been released to her this year with the goal of turning them into Indie books.
Visit Myra's at www.myranour.net
Check out BTS Book Reviews at www.btsemag.com

Posted by Sabrina's Paranormal Palace at 12:24 PM No comments: