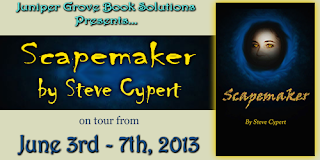 I am so excited to be participating in this tour. I enjoyed this book and the new to me beings in this book. So let's get started and meet the author Steve. 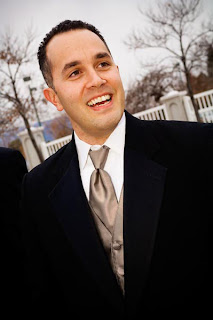 Steve V Cypert was born in .  At twenty-four he moved to , where, two decades later, he continues to live. At age 34 he found and married his beautiful wife, Katie. Today, at age 40, he and his wife still live in with their baby and their 4 year old Shih Tzu. Steve graduated from the in 2003 where he graduated with a 4 year degree.
For as long as he can remember, Steve has loved to come up with creative and far-fetched stories. In 2011 Steve finished his first novel, a work of historical fiction. He wrote in just three months. However, it took him ten years of research, editing and putting the missing pieces together.  In 2012 he wrote a second novel, the first in a series of four. Though, this time it was a YA paranormal fantasy. The title, at first, was The Son of Nicholas Namely, but Steve soon changed it to Scapemaker, which is also the name of the 4 book series. As of January 2013, the outline for the second book in the series was completed.

Steve loves photography. He shot weddings for a few years, but loves wildlife and landscape; he also loves volleyball and hiking; he has a mountain bike, but never rides it; finally, he is a self-professed indulgent and fanatically addicted big screen movie junkie. His favorite color is green. He loves steak and prime rib – medium rare or rare. His “lucky” number is 4. His favorite ice-cream is mint chocolate chip. And he loves horseback riding and country swinging – which he is very good at… sloppy, but good! 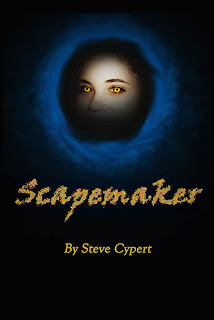 Matthew is the son of Mr. Nicholas Namely, a local high school teacher. However, Matthew does not know that his father is a dreamscaper, whose classroom is connected to the dream-world. From his classroom, Mr. Namely’s students enter the halls of Scapemaker, a dream-world high school for young and inexperienced dreamscapers.

Following a couple of tragic events—his father’s sudden comatose condition and the unbelievable mysteries surrounding the unexpected death of his best friend, Dobian Brown—Matthew is compelled to investigate and is propelled into a whole new world. Matthew and his mother, Mae, are soon coerced into moving across the country for his father's strange medical needs. While attending his new school, Matthew comes to know the secrets that Daedree, an annoying girl from his former high school, has locked away. Matthew also meets Amber, a beautiful enigmatic girl who leads him to Mr. Xoner's classroom. While there, he learns the art of dreamscaping (which, unbeknownst to Matthew, has been in his bloodline for thousands of years). This new life will lead Matthew to unbelievable characters with the most extraordinary abilities he could have ever imagined—and the most deadly and wicked villains he never thought he’d be up against.

Matthew will come to know of Nox Celare, otherwise known as The Sandman, who is after a special element called Magineum. He must not only solve the mysteries surrounding those tragic events, but he will also have to protect the Magineum with his life and find a way to be with the girl of his dreams. Neck deep in skinwalkers (shape shifters), sandsleepers, zombies, goblins, soul feeders, ghosts, ogres, dragons, dream-world criminals known as “night terrors” and more, Matthew learns he is in over his head. With the help of his friends, Mr. Xoner, and a determined FBI agent, Matthew will learn more about his father than he ever hoped to—or wished to know. He soon uncovers the reason for his father’s comatose condition; with vague implications of a traitorous act and a possible connection to Doby’s death, Mr. Namely had been convicted and his mind held within the notorious Sandstorm Prison inside the dream- world. Matthew must now prove his father’s innocence as a helpless victim of Nox’s plan to escape Sandstorm Prison

Excerpt:
“Matthew, step back!” cried Mr. Xoner. “Quickly, step away!” Matthew was petrified as he watched in complete fear. “Run,” shouted Mr. Xoner, joined now by the rest of the students with voices of their own, “run, run, run!”
Now much larger than any two students combined, [it] burst from [its] skin, emerging like a reptilian monster from [its] shell complete with fire lit eyes. [Its] teeth were long and sharp. [It] reached for Matthew with arms that were now twice the size of Matthew’s torso.
All the students in the room screamed chaotically and ran through the dreamgate. Matthew tried following the students through the door but was tackled by Mr. Xoner. “No, Matthew, not there. Not yet.”
“I don’t know what’s behind that door but I’ll take it over that thing any day,” said Matthew as he tried to squirm away from Mr. Xoner’s grip. Although he was smaller and frailer than Matthew, Mr. Xoner held him against the floor boards next to the ornate door.
The windows high on the wall began to shake along with the walls as [it] approached. His every step fractured the floor sending cracks through the foundation.

My Review:
I have mixed feeling about this book. I enjoyed it and the world created by Steve. But I had to force myself at first to keep reading as the book started off slow for me. But once it got going I couldn't put the book down. I enjoyed the mix of beings in this book. I haven’t read any books with sandsleepers or soul feeders and I really enjoyed reading about them and I hope to find more books with these kinds of beings in them.
I got so lost in this world created by Steve that I forgot everything around me. With the mystery, secrets, forbidden young love, and new to me creatures I am so looking forward to the next book. 4/5 Bloody Fangs

Thank you Steve for letting me review your book and Thank You to Jaidis for letting me participate in this tour. Don't forget to enter the giveaway.
~Sabrina

a Rafflecopter giveaway
Posted by Sabrina's Paranormal Palace at 2:47 PM