I am so excited to be on this tour. Lynda writes a book that will leave you begging her for more. And I for one can not wait to get the rest of the books. So let's get to know more about Lynda and her books. 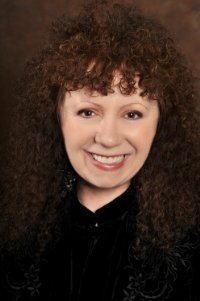 Lynda's books can be classified as urban fantasy/dark fantasy with romance, suspense/mystery, satire, horror, humor and sex.
Lynda Hilburn writes paranormal fiction. More specifically, she writes vampire books. After a childhood filled with invisible friends, sightings of dead relatives and a fascination with the occult, turning to the paranormal was a no-brainer. In her other reality, she makes her living as a psychotherapist, hypnotherapist, professional psychic/tarot reader, university instructor and workshop presenter. Her series, Kismet Knight, Vampire Psychologist is being rewritten and will be republished by Quercus Books in the UK and Europe, and by Sterling Publishing/Silver Oak in North America. The UK version of the first book in the series, "The Vampire Shrink" will be published September, 2011. The North American version a few months later. Book #2 (tentatively titled "Blood Therapy"), which is a new book, will be published a year later, and book #3 (the book that used to be called "Dark Harvest") will follow a year later. She also has a short story in the anthology, "Mammoth Book of Paranormal Romance," called "Blood Song." "Diary of a Narcissistic Bloodsucker" and "Undead in the City" are available through Amazon.com and Smashwords 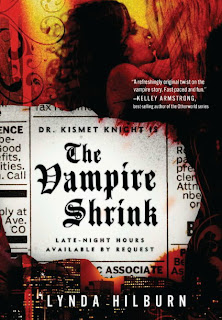 A sizzlingly sexy urban fantasy sure to feed the hunger of ravenous, vampire-loving fans.
Kismet Knight, a brainy Denver-based psychologist with a stalled career and a nonexistent love life, is about to have her world rocked. Not only does her newest patient, Midnight, long to become a vampire, but the teenager insists that a coven of the undead hangs out at a local goth club. The always-rational Kismet dismisses Midnight's claims as the delusions of an attention-starved girl—until bodies start turning up drained of blood and the hottest self-proclaimed vampire ever to walk the face of the earth enters her office.
What's real? What's not? As inexplicable events and romantic opportunities pile up, along with the corpses, Kismet finds herself in a whirlwind of passion, mystery, and danger. But this tough and funny heroine—who doesn't do damsel in distress—is about to turn the vampire-meets-girl convention on its head.


My Review:
I loved this book. It has been one of my favorite reads so far this year. I can’t wait to get the rest of the books in this series.

Kismet is a psychologist who leads a predictable life that is until a new patient comes to see claiming she wants to be a vampire. Kismet thinks she is lonely and looking for attention that is until she master the vampire of the city Devereux but even then Kismet doesn’t believe anything. But one night at Devereux’s club changes everything Kismet believes and soon she is thrown into a war brewing between vampires and being told she is the mate Devereux has been waiting for over a one hundred years. But Kismet is not your damsel in distress she meets every obstacle head on.

Anybody who knows me knows I love vampire books and this one did not disappoint me. Kismet is a strong heroine who I instantly connected to. However at times I wanted to smack her for doubting Devereux and the things she was seeing. Devereux is just dreamy and sexy. I loved him from the moment he walked into Kismet’s office. And the chemistry between them is HOT and steams up the pages. My only complaint is I wanted more Kismet and Devereux together.

With a plot that has so many twists and turns it will have you turning page after page to get to the very last one and have you begging for more. 5/5 Bloody Fangs 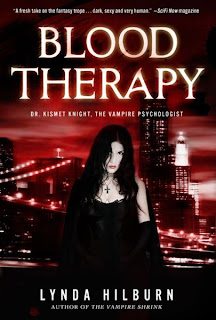 Blood Therapy is a dark contemporary fantasy with humor, mystery, romance and adult situations.
Kismet Knight knows exactly how to handle her clients, but when it comes to her love-life, she's on less steady ground. That was until she met master vampire Devereux, an 800-year-old hunk, who not only managed to convince the entirely rational shrink that vampires really do exist - he also persuaded her to start dating him.
Kismet's still having nightmares after being kidnapped by Lucifer, a psychotic vampire. From a therapeutic perspective she finds his split personalities fascinating - but she's constantly terrified. And Dev's become obsessed with finding Lucifer - before he comes after Kismet again.
So much for her nice, ordinary life...

a Rafflecopter giveaway
Posted by Sabrina's Paranormal Palace at 2:22 AM