Today on my  blog I have the Horizon tour. On my stop there is a spotlight, review, and giveaway. 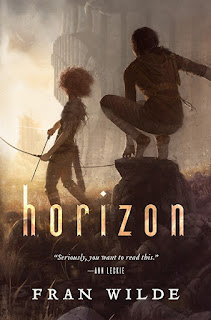 A City of living Bone towers crumbles to the ground and danger surrounds. Kirit Densira has lost everything she loved the most―her mother, her home, and the skies above. Nat Brokenwings―once Kirit's brother long before the rebellion tore them apart―is still trying to save his family in the face of catastrophe. They will need to band together once more to ensure not just own survival, but that of their entire community.

Review:
I went into this not having read the previous books so I was a bit lost but with that said I still very much enjoyed this book and I really want to go and get the first two books. I can't really talk a lot about the characters as I don't really know them well but I can say that I enjoyed the author's writing. Her writing made me feel like I was on a vivid grand adventure and I loved every minute of it. I kept turning the pages just to see what was going to happen next. I can't wait to get the other books so I can read them all three and get a better feel for these characters that I am already connected to. I highly recommend this book. 4/5 Bloody Fangs

Praise for THE BONE UNIVERSE Series

"Wilde’s fantastical trilogy (after Cloudbound) takes on violent political divisions, ecological desolation, and the imminent death of the only world the characters have ever known....Fans of the series will be satisfied by its conclusion." ―Publishers Weekly on Horizon

“A fantastic follow-up to Updraft―I liked it better than its predecessor, particularly for what it says about the politics of fear and prejudice, and how giving people what they want isn't always the best thing." ―Aliette de Bodard, award-winning author of House of Shattered Wings, on Cloudbound
"A thrilling and complex tale about the most difficult stage of a revolution: what do you do after you win? Highly recommended both for the story it tells as well as how it tells that story. Wilde takes risks that pay off hugely.” ―Ken Liu, Hugo and Nebula Award-winning author of The Grace of Kings, on Cloudbound

"A book that’s impossible to put down. [Wilde has] planted herself firmly in the “authors to watch” category." ―Andrew Liptak on Updraft

"The world of the towers grown from bone, where residents strap on wings and soar the air currents, is captivating...Kirit’s journey to find her place is satisfying, but the real draw is a world that readers will be anxious to revisit in future volumes of this exciting new series." ―Library Journal, starred review, on Updraft 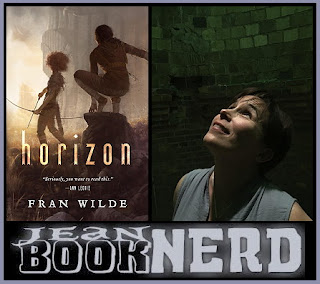 Fran Wilde’s novels and short stories have been nominated for two Nebula awards and a Hugo, and include her Andre Norton- and Compton-Crook-winning debut novel, Updraft (Tor 2015), its sequels, Cloudbound (2016) and Horizon (2017), and the novelette “The Jewel and Her Lapidary” (Tor.com Publishing 2016). Her short stories appear in Asimov’s, Tor.com, Beneath Ceaseless Skies, Shimmer, Nature, and the 2017 Year’s Best Dark Fantasy and Horror. She writes for publications including The Washington Post, Tor.com, Clarkesworld, iO9.com, and GeekMom.com. You can find her on Twitter, Facebook, and at franwilde.net.


~Sabrina
a Rafflecopter giveaway
Posted by Sabrina's Paranormal Palace at 12:02 AM