Today on my blog I have the Berserker tour. On my stop there is a spotlight, excerpt, and giveaway. 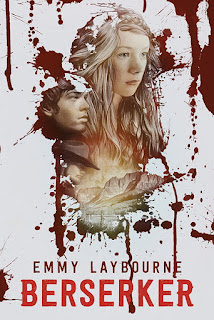 Are Hanne's powers a gift from the old Norse gods, or a curse?
Her brother Stieg swears their powers are a gift from the old gods, but Hanne Hemstad knows she is truly cursed. It's not Stieg's fault that their father is dead, their mother has left, and their brother Knut has been accused of a crime he didn't commit.
No, the fault lies with Hanne and her inability to control her murderous "gift"--she is a Berserker. When someone she loves is threatened, she flies into a killing state. The siblings must leave Norway for the American frontier or risk being brought to justice.
Aided by a young cowboy who agrees to be their guide, Hanne and her siblings use their powers to survive the perilous trail, where blizzards, wild animals, and vicious bounty hunters await.
Will they be able to reach their uncle, the one man Hanne believes may be able to teach her how to control her drive to kill? With Berserker, Emmy Laybourne, the author of Monument 14, presents her vision of an American west studded with Viking glory.


One moment Hanne was deep in the feather bed, cuddled near her sister, her body heavy with the rich sleep of the hard-worker; the next her bare feet slapped the cold floor and she was upright.
She was propelled to the door. Her hands found the latch. She pushed into the hall. There was danger in the barn. Her heart beat with such urgency and alarm, she had to run. She tore down the stairs, three at a time. Her nightgown caught against the rough hewn wall, but she did not feel the fabric tear.
Then she was outside, striding towards the threat. The barn. She heard the voices of men, three of them, arguing with her father.
“We’ve waited long enough!” came a low voice. It was Nils Paulsen, the gambler from the pub. Hanne knew this instantly.
Her feet went across the mud.
She saw every detail of the dark farmyard. The pitchfork left out by accident. The pots with Sissel’s foxglove plants and wild roses, fallow now, until the springtime. There was a matched team of dun brown horses standing next to the barn, asleep on their feet and still harnessed to a wagon. Her breath made frost, but not much because she moved too fast.
“You wouldn’t shoot me,” she heard her father say.
The heavy barn door was thrown open; it was she who threw it, but she did not feel herself do it.
Four men turned, shocked. At first, she saw only the gun.
“Hanne, no! Hanne!” her father shouted.
Hanne stalked in. Three attackers, this was new. She had only fought animals before, and only one at a time. The man with the gun was in front, his two cronies at each of his sides. Her father had his back to her. The horses were in their stalls, huffing and stamping, displeased. The chickens roosting in the rafters were awake and clucking with alarm.

"A completely winning, romantic, and heart-wrenching historical fantasy. Your pulse will race from page one of this rich, rugged adventure of a book."―Alyson Noel, New York Times-bestselling author of The Immortals series

"Berserker embraces the beautiful brutality of both Viking lore and Frontier tales, and it does so without resorting to tired tropes or toxic masculinity. This is a brilliantly unexpected fusion of cowboys and old gods―intense and gritty and yet surprisingly tender―but the real strength of Emmy Laybourne's writing is that, for all their superhuman abilities, her characters are so very human."―William Ritter, author of the New York Times-bestselling Jackaby series

“Simultaneously terrifying, hilarious, and action-packed, Sweet is a wild ride that holds up a warped mirror to our society. I loved it from the first line to the last.” ―Marie Lu, author of Legend and The Young Elites on Sweet 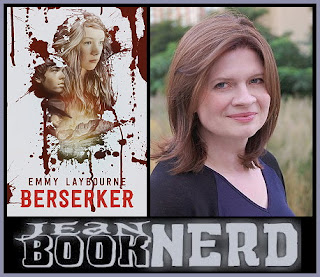 Emmy Laybourne is a novelist, screenwriter and former character actress. She is the author of the upcoming release BERSERKER ("You will love Emmy Laybourne's vision of an American west studded with Viking glory." - Hypable.com), as well as the MONUMENT 14 trilogy ("Frighteningly real… riveting" - NYT Book Review, Editor’s Choice) and the novel SWEET (“A gripping action-adventure survival story” – VOYA, rated Perfect Ten).

Before her life as a novelist, Emmy performed original comedy on Comedy Central, MTV and VH1; and acted in the movies "Superstar," "The In-Laws" and "Nancy Drew," among others. Emmy lives outside New York City with her husband, two kids and a flock of 9 nifty chickens.

Thank you for stopping by my blog today. I would also like to say Thank you to Jean for letting me participate in this tour. Don't forget to enter the giveaway below.