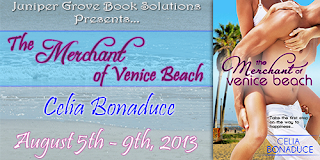 Today on my blog I have The Merchant of Venice Beach blog tour. On my stop there is a spotlight, excerpt, review, guest post, and giveaway. 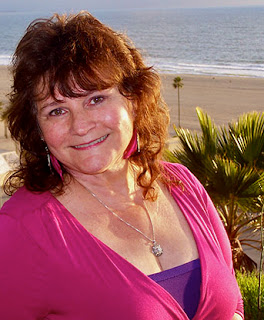 Currently a Field Producer on HGTV’s House Hunters, Celia Bonaduce's TV credits cover a lot of ground - everything from field-producing ABC’s Extreme Makeover: Home Edition to writing for many of Nickelodeon’s animated series, including Hey, and Chalkzone.

An avid reader, entering the world of books has always been a lifelong ambition. eKensington’s The Merchant of Venice Beach, A Venice Beach Romance Book # 1, was published August 1st, 2013.

Guest Post:
Q: In addition to being a writer, you are the Field Producer for HGTV’s House Hunters, which often has you traveling. Is it difficult to find a balance between work and finding time to write?

A:  I started my journey as a novelist when my career was – shall we say – stagnant. I was used to working on HGTV lifestyle shows, which I loved, but then along came REALITY TV, which was, weirdly, my same skill set.  I just did NOT want to Keep Up With The Kardashians.  None of us know what the cosmos has planned, but I was pretty sure I was not put on
this earth to find the Bachelorette a husband or incite the Bridezillas to further mayhem.  I was at a crossroads and decided I better look into other forms of employment.  I knew novel-writing was a long shot, but so was everything else!  So I wrote and wrote and wrote, and the day I got my agent, I got a call that they wanted me to work on Extreme Makeover: Home Edition.  The day I got the call that Kensington was going to publish my trilogy, I was offered the job on House Hunters.  So it appears I was meant to write the books, but also to go back to quality TV.

Now that I am on House Hunters and traveling about half of every month, balancing work and writing is tough. This question is actually uppermost in my mind these days, since I have a three book deal with Kensington on the Venice Beach Romance books, and only have two and a half books written.

I need to get out of my comfort zone and find a way to write outside of my home office – and how to write at different times of day instead of just the morning.  If I can crack that nut – write in coffee shops, write in airports, write on the plane – then I should be in good shape.  I actually have plenty of downtime on the road.  Beside the aforementioned hours in airports, I usually finish shooting at dusk (whenever that is). After dinner and a little bit of paperwork, I pretty much could write for a couple hours every evening.  In theory, I’m good to go.  But I use a ton of brain-power during the day and the bathtub is too hard to resist.  Perhaps the answer is to get a hotel room with only a shower. 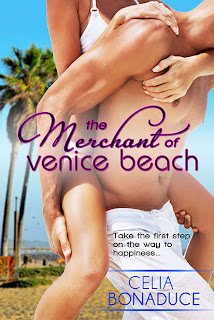 The Rollicking Bun—Home of the Epic Scone—is the center of Suzanna Wolf’s life. Part tea shop, part bookstore, part home, it’s everything she’s ever wanted right on the Venice Beach boardwalk, including partnership with her two best friends from high school, Eric and Fernando. But with thirty-three just around the corner, suddenly Suzanna wants something more—something strictly her own. Salsa lessons, especially with a gorgeous instructor, seem like a good start—a harmless secret, and just maybe the start of a fling. But before she knows it, Suzanna is learning steps she never imagined—and dancing her way into confusion.

Excerpt:
Suzanna was in a panic. After several futile attempts at looking for shoes on-line, it became clear she was never going to have enough alone time to really investigate the subject properly. All the research she did manage just brought about more questions, not less and Suzanna had to admit that she really needed some expert help in finding the right shoes. Now her first salsa lesson was looming, and she had somehow not managed to find the time to go to Dante’s Dancewear. She didn’t know exactly what she wanted, but she knew she couldn’t show up at the studio in the wrong shoes…whatever that meant!
Slipping away from The Bun as soon as the afternoon tea crowd had settled down, Suzanna pointed her Smart Car towards , where Dante’s Dancewear beckoned. Suzanna walked noiselessly into the store, ready to appear confident and assured. After all, she didn’t know everything, but she knew she wanted “character shoes.”
“You don’t want character shoes,” said the stone-faced skeleton behind the counter.
It’s times like these when Suzanna remembered why she never left her comfort zone. When she was managing The Bun or hanging out with Fernando and Eric, curve balls like this were never hurled at her.  The little self-doubts pricked at her like tiny toothpicks, but she pulled myself together, arched an eyebrow and breathed… “Oh?”
“A character shoe has a leather sole. You want a suede sole for classes.”
“Oh,” she paused emphatically. And then, because she couldn’t stand not knowing, added, “Why?”
“The suede glides on the wood floor,” she replied, “and a suede soled shoe is lighter and easier to dance in for long periods of time.”
It took Suzanna a moment to let go of her character-shoes-dream, but since her character-shoes-dream was only about a week old, she found she could easily replace it with the new, more dance-centric suede-sole dance-shoes dream. Because, make no mistake, she planned on dancing for long periods of time!
She asked the skeleton to show her some suede-soled dance shoes that would lend themselves to sensuous salsa.
“What color?” She asked.
Red? Too showy. White? Too virginal.
“Black!” Suzanna said.
“You don’t want black.”
Suzanna left Dante’s Dancewear a little more unsteady and a lot less sure of herself than when she entered, but she had to congratulate herself.  She had bought her dance shoes.
They were beige.
Apparently in the dance world, one referred to “shoes” in the singular. You bought a “shoe” and somehow your other foot magically got shod. According to the skeleton, one did not want a shoe that stood out. One wanted a shoe that blended in. Suzanna argued that the whole point of dance lessons was that she was damn SICK of fitting in.  The skeleton replied that she wanted her form and herself to stand out – not her feet.
“Beige hides footwork mistakes,” she said.
So Suzanna bought beige.
Suzanna clicked off the alarm in her Smart Car and hid her clandestine purchase in what was passing for a trunk in the vehicle that was passing for a car. Suzanna wondered briefly if the hot dance instructor would be impressed with her wise choice of a beige shoe. She looked down at her iPhone calendar – she’d find out in less than 4 hours.

I enjoyed this book. It was a quick and easy read I finished in an afternoon. The characters are great. I loved the friendship between them all but I did enjoy it more when the foursome became a trio. I wasn’t to found of Carla for some reason. I just couldn’t connect to her. My favorite character is Fernando he reminded me so much of my friend from school. I could see myself hanging out with him and Suzanna. I loved the shop they owned. I would love to own one myself. The location is perfect right on the boardwalk.

If you’re looking for a quick and fun read I recommend this book. 3/5 Bloody Fangs

Thank you for stopping by my blog today. I would also like to Thank Celia for letting me review your book and Thank Jaidis for letting me participate in this tour. Don't forget to enter the giveaway.
~Sabrina

a Rafflecopter giveaway
Posted by Sabrina's Paranormal Palace at 2:16 AM