Queen Of The Sea

Praise for QUEEN OF THE SEA

The art, reminiscent of Raina Telgemeier’s style, creates levity during perilous situations. The book is dense with dialogue, often feeling more like a work of prose than a graphic novel. As a result, this complex work will be more accessible to those familiar with graphic novels…Certain to charm sophisticated graphic novel devotees. —School Library Journal (starred review)

Meconis offers an atmospheric alternate history inspired by the childhood and succession of Queen Elizabeth I in this quietly ambitious graphic novel…Art in soft, earthy colors brings this singular story to life in styles ranging from simple line drawings to elaborately styled text illuminations. The island world is richly developed, both in its physical particulars and its close-knit community (fascinating digressions into topics such as convent time, hand gestures used at table, and chess and embroidery flesh out daily life), and Margaret proves herself an endearing heroine with a strong voice full of humor and wonder. Her perspective transforms a storm-wracked rock into a vibrant world of hidden treasures. —Publishers Weekly (starred review)

Meconis’ humor and storytelling gifts here wed seamlessly with her evocative pen-and-ink and gouache illustrations, which are rendered in warm earth and sea tones and brim with movement, expressively capturing even Margaret’s interior monologues. With its compelling, complex characters and intrigue-laden plot, this will have readers hoping it’s only the first of many adventures for Meconis’ savvy heroine. —Kirkus Reviews (starred review)

“Weaving faith, love, statecraft, and self-discovery into a tale of palace intrigue relocated to the halls of a convent on a remote island at sea, Dylan Meconis uses the trappings of the history we know to create a high-stakes adventure in an alternate past that feels so detailed and so familiar, you’ll find yourself wondering why you never read about it in school. This beautiful book swept me away from the first page.” —Kate Milford, author of the Greenglass House series

“Dylan Meconis is at the absolute top of her game. A gorgeously rendered, lovingly realized alternate history, full of personal revelations in the midst of political intrigue. A tale of growing up, and of understanding that the world is larger and stranger than it once seemed. (Plus it has a Terrible Recipe for Terrible Gruel.)” —Ben Hatke, author-illustrator of the Zita the Spacegirl series

“This is the book I was always trying to get my hands on in high school that never seemed to materialize. An adventure to lose yourself in, with an attention to historical detail to please the nerdiest among us. I fell easily and completely into this world and its characters, knowing I was safe in Dylan Meconis’s hands, and I’m really excited for more people to find out what I’ve known for a long time—that she is one of a kind.” —Kate Beaton, author-illustrator of Hark! A Vagrant 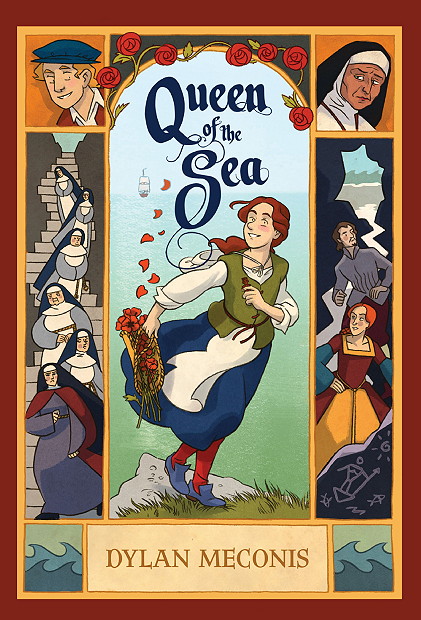 Cult graphic novelist Dylan Meconis offers a rich reimagining of history in this hybrid novel loosely based on the exile of Queen Elizabeth I by her sister, Queen Mary.

When her sister seizes the throne, Queen Eleanor of Albion is banished to a tiny island off the coast of her kingdom, where the nuns of the convent spend their days peacefully praying, sewing, and gardening. But the island is also home to Margaret, a mysterious young orphan girl whose life is upturned when the cold, regal stranger arrives. As Margaret grows closer to Eleanor, she grapples with the revelation of the island’s sinister true purpose as well as the truth of her own past. When Eleanor’s life is threatened, Margaret is faced with a perilous choice between helping Eleanor and protecting herself.

You can purchase Queen of the Sea at the following Retailers: 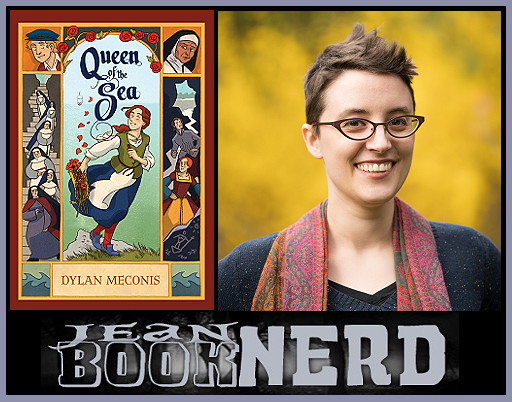 I’ve been writing and illustrating my own stories since the first grade, and I’ve been making comic books since middle school (no, really! Seventh grade was a tough year for me socially, so I had a lot of time to draw). I started my first book-length comic (graphic novel) in high school.

Unlike a lot of people who become professional artists and authors, I didn’t go to art school or a creative writing program in college. Instead, I mostly studied history, literature, philosophy, and French in the College of Letters at Wesleyan University. This means I have a brain full of weird facts, old books, strange art, and the extremely useful ability to read The Tales of Canterbury in the original Middle English. Except for the Middle English bit, it’s all come in very handy for writing and drawing historical fiction and fantasy.

I first started to get paid for making comics when I was still in college, when my first graphic novel was published online. After college, I worked as a graphic designer and visual communications consultant (which means “person who helps teach adults complicated stuff in cool new ways using pictures”). I’ve worked with Fortune 500 companies, global charities, technology companies, libraries, and a lot of other interesting organizations. I’ve made illustrations, animations, information graphics and cool presentations, explaining everything from how microchips work to the ways that clean drinking water can help communities in the third world.

For the last ten years, though, I mostly work as a writer, comic book creator and illustrator! Sometimes I make books totally by myself, and sometimes I get to team up with other writers or artists. It can be lots of fun, but it can also be very hard work. Luckily, I never get tired of making new stories.

*JBN is not responsible for Lost or Damaged Books in your Nerdy Mail Box*
a Rafflecopter giveaway
CurrentTours
Posted by Sabrina's Paranormal Palace at 11:10 AM