Praise for A MURDER ON JANE STREET

"Family ties tighten and bonds of affection grow stronger as a family is trapped between ruthless forces struggling for the highest stakes: control of a world to be subjected to unimaginable evil. As.parents, children and loved ones risk all to protect one another, events accelerate towards a conclusion that is in doubt until the last page is turned. A terrific read!" ―Richard Gid Powers author of The Mystery of the Trinity

"A MURDER ON JANE STREET is a gripping summer thriller filled with history, adventure, and an intriguing mystery. Cathy Cash Spellman will keep readers on the edge of their seat" ―Charles Brokaw, New York Times Bestselling author of The Atlantis Code

Cathy paints a picture with the most radiant phrasing and colorful words! I’m a fan of her books and have read every one of them, always wishing that she’ll write more! That hope was answered with A MURDER ON JANE STREET. This compelling gem of a mystery is also a history, a conspiracy, and a modern-day morality tale rolled into one. Yes there is a murder, deadly secrets and treachery, but at its heart, it’s also about family, friendship and having the courage to do the right thing in the face of nearly insurmountable odds. This brilliant author has created yet another home run! Her narrative, coupled with an edge-of-your-seat contemporary mystery thriller, have characters that warmed my heart and an unexpected ending that I absolutely LOVED! ―Adria de Haume, author of Cross Purpose

"Do NOT read this book unless you are willing to be seduced by a dozen incredibly keen people without whom the world as we know it might cease to exist." ―K.T. Maclay author of Beginners Guide to Death and Dying in Oaxaca 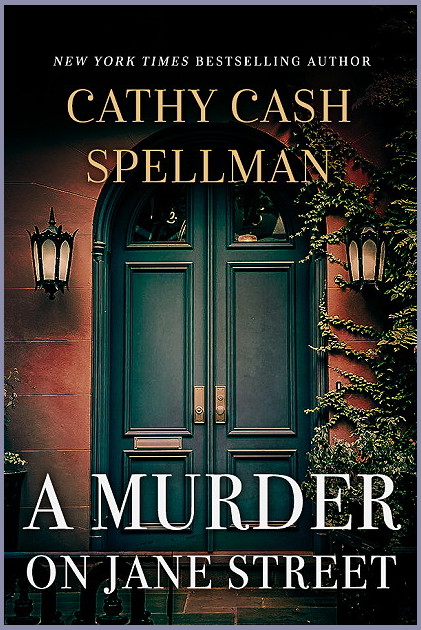 A brutal murder.
A heinous secret
A deadly conspiracy.

The brutal murder of the little old lady next door puts FitzHugh Donovan on the case. A retired New York City Police Chief, he knows a cover-up when he sees one and his Irish Cop conscience can’t let that happen.


Now, Fitz, his family and his quirky band of Bleecker Street Irregulars are ensnared in the bizarre secret the woman died to protect.

Is this a 75-year-old cold case turned hot again, or an unspeakable crime-in-progress that could alter the course of the world?

Fitz doesn’t yet know how high the stakes are, that failure isn’t an option, and that the little old lady was so much more than she appeared. But he’s trying to keep everyone alive long enough to find out.

Characters you’ll care about, dark shocking secrets, and disturbing similarities to today’s political scene, will keep you turning pages to an ending you won’t see coming.

Excerpt:
A MURDER ON JANE STREET
by Cathy Cash Spellman

From Mrs. W.’s Journal
My mother’s ancestral home was the Milewicz castle in Lower Silesia. It was an astonishing medieval fortress with a history burdened by centuries of the fortunes of war.
The area around the Jelenia Góra valley in particular had played host to kings, popes and princes for the better part of a thousand years, and it was there I learned to ski, to ride, to hunt with gun and bow, to dance and frolic, and to expect that life would provide me always with only that which is best. The world of privilege I inhabited defies conscience now—in my times of terrible hardship I have remembered such beauty and safety with both gratitude and anguish.
Nowhere in Germany would be safe for me if Manfred pursued me, so I chose to run toward Poland and the remembered safety of childhood. When one flees in terror for one’s life, young, alone and terribly afraid, decisions are more visceral than prudent.
It was winter. Snow covered the world, but I was immortal as only the young can be, and so on that night in 1944 when I escaped Manfred and rode off into a world of carnage I could barely comprehend, although terrified and in debilitating pain, I felt freer than I had since childhood. Little did I know that freedom requires a plan, friends, safe haven and preferably a world in which opposing armies are not marching toward each other and leaving scorched earth behind.


The reality of my escape was a litany of horrors. Stabbing pain from my fractured ribs made riding hard and breathing harder still. The weather made movement slow, and quickly exhausted my horse, who was malnourished within days. There was devastation all around us … food for humans, never mind an animal, could not be had for love nor money. The war had left nothing untouched, and the roads I’d intended to travel were blocked at every turn by police or soldiers. A journey that should have taken days stretched into weeks of pure, unadulterated horror. Terror ate at my gut as relentlessly as starvation.
Review:
I recently got back into reading mystery books this past year and I am so glad I did, otherwise I would have missed out on reading this book. I was hooked on this book from the start as I not only love mystery books but this one has a historical element added whic made me love it even more. But what I really enjoyed is the way Cathy writes her characters and the visual of the story. I fell like I know them and that I am actually there in this story. I can't wait to read more from this series and more from Cathy herself. I highly recommend this book to you if you love a good mystery and want to keep turning the page to find out who did it. 5/5 Bloody Fangs

You can purchase A Murder on Jane Street at the following Retailers: 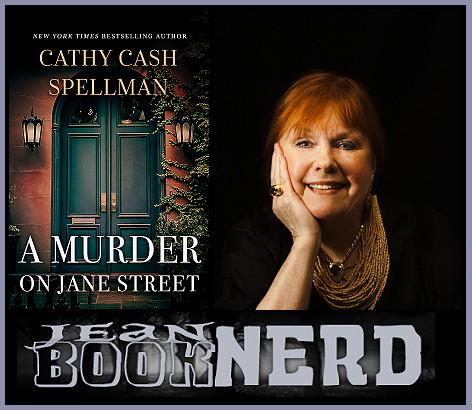 Multiple New York Times and International Bestsellers, a Paramount Movie, book sales in 22 countries, Cathy Cash Spellman writes stories about love, friendship, adventure, and history. Known for her big sprawling sagas and memorable characters, Cathy writes the kind of stories women like to lose themselves in, and then remember long after the book is done.

Bless the Child was a Paramount movie in 2000, starring Kim Basinger and Jimmy Smits, and Paint The Wind has been optioned for film and TV.

She has written for Self, Harper’s Bazaar, Town & Country, Mademoiselle, Cosmo, Penthouse, Mode, Kung Fu and many other magazines about women, health, empowerment, sexuality, spiritual philosophy and Astrology. She blogs for The Huffington Post and The New York Times.

a Rafflecopter giveaway
Posted by Sabrina's Paranormal Palace at 12:18 AM