Hello Book Lovers! Today on my blog I have the Finchosarus blog tour. On my stop there is a spotlight, excerpt, review, and giveaway. 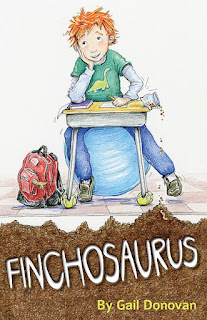 FINCHOSAURUS follows the adventures of Atticus Finch Martin, otherwise known as Finch. Finch’s dream is to uncover a dinosaur fossil and name a new species after himself—until he digs up a note in the fifth-grade class garden with the word HELP on it. He is determined to come to the aid of the mystery note-writer. But when the quest turns out to be harder than expected, Finch risks losing two things that he really wants—his best friend Noah, and a field trip to Dinosaur State Park.

Excerpt:
Mrs. Adler drew a deep breath and put the this-hurts-me-more-than-it-hurts-you look on her face. “I am really disappointed, Finch,” she said. “You know what this means, don’t you?”
Finch nodded. Of course he knew what it meant! It meant he was a fidgeting, impish, nincompoopy chicken who wasn’t going to Dinosaur State Park. It meant that she and Mr. White and his mom and his dad would all say they were “disappointed in him,” which just meant that they would pretend to be sad and surprised that he had messed up…
Back at his desk, Finch bobbed lightly up and down on his bouncy chair. He pulled a bunch of stuff from his desk, so he could pretend to be cleaning.
It seemed like all he did anymore was pretend.
He pretended he was a dinosaur. He pretended he was going to be a paleontologist. He pretended he was doing his best work.
The dinosaur pretending was like make-believe. In make-believe, you knew what was real and what wasn’t. He knew he wasn’t really a dinosaur. Obviously. Maybe it was a little babyish, but it wasn’t doing anything bad.
Pretending that he was going to be a paleontologist was another kind of make-believe. He really did want to be a paleontologist. It was like making a wish. Maybe it was stupid, because to be an actual scientist you probably had to go to a lot of school, and school was not something he was good at. But at least it wasn’t wrong to wish something.
But pretending to other people that he had been doing his best—that was like telling a lie. He had told himself it was okay, but it wasn’t. He could tell that from Noah’s face, which looked scrunched up tight, the way it had when Noah was telling him about Rozzy being sick.
And now, pretending that he didn’t care about the trip to Dinosaur State Park—that was ridiculous. He wasn’t fooling anybody. Everybody knew how much he wanted to go.
Finch didn’t like this feeling. He needed to feel something different. He bounced a little higher on his chair.
“Finch,” said Mrs. Adler. “Settle down, please.”
Finch didn’t want to settle down. He wanted to bounce. Bounce, bounce, bounce.
“Finch!” said Mrs. Adler.
Bounce, bounce, bounce. Bounce bounce bounce bounce bounce!
“Finch! If you can’t settle down, I will—”
Nobody heard what Mrs. Adler would do if Finch couldn’t settle down, because everybody was laughing. Because Finch had bounced himself right off his chair and slam-landed on the floor. Which landed him out in the hallway with Grammy Mary so he could “collect himself.”

Excellent. Out here he didn’t have to see Noah, looking so bummed, which just made him feel more bummed than he already was. He was dreading lunch, when Noah would probably bite off his head.

Review:
I loved this book. It was so fun and cute. It follows a boy named Finch who loves dinosaurs and is always digging trying to find the next fosil. While outside one day at school he was digging and found a note that said Help. This note sends Finch on a hunt to see who wrote it and how he can help them. He starts off by try ing to find out on his own but realizes he needs help so he tells his bestfriend Noah which then leads to them telling another classmate. While the three of them are working on finding out which classmate wrote it they start helping the kids in class who they know need help. But while doing this Finch doesn't get his own schoolwork done and is at risk of not going on the field trip. But just when you think he can;t go all his classmates come to his rescue and help him just like he had been doing for them.


I really enjoyed this book. Finch is a great character and his heart is in the right place even though he forgets to do his own work in the process. But he has a great best friend who is looking out for him. This book definitely shows that helping others is a good thing but you have to remember to take care of yourself and ask for help when you need it. I hihgly recommend this book to kids and adults. 4/5 Bloody Fangs

"...If it's anything like the last (In Memory of Gorfman T. Frog), it's worth discovering." ―Elizabeth Bird, School Library Journal

"An amusing, empowering tale that should appeal especially to middle schoolers with abundant energy." ―Kirkus Reviews

“The book captures the pains and pleasures of being both a twin and a fourth-grader.” —Booklist

“Bailey is emotionally authentic, with an individualistic voice and a strong streak of stubbornness, of which she is particularly proud.” —Publishers Weekly

“Purposeful in a lighthearted way but guaranteed to make your head—scalp and brain—itch!” —Kirkus Reviews

IN MEMORY OF GORFMAN T. FROG
"Middle-graders will celebrate as Josh learns to use his personal “pause” button to stop talking long enough to keep out of trouble. Obvious appeal, particularly to fans of Andrew Clements’s work.” —Kirkus Reviews 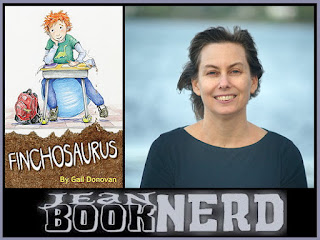 Gail Donovan is the author of the middle-grade novels The Waffler, What’s Bugging Bailey Blecker?, and In Memory of Gorfman T. Frog, which was named a New York Public Library Best Books for Children. She is also an author for the Rainbow Fish & Friends picture book series based on the bestselling books of Marcus Pfister. Donovan, who was born and raised in Connecticut, lives in Maine with her husband and two daughters, where, in addition to writing children’s books, she is a library assistant at the Portland Public Library.