Today on my blog I have The Shotgun Arcana. On my stop there is a spotlight, review, 10 Favorite Books Read This Year, and a giveaway. 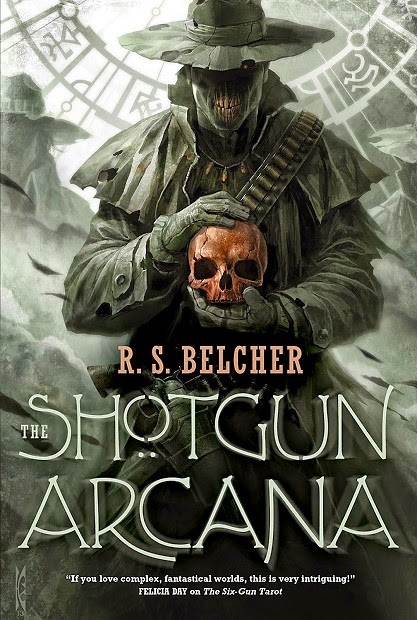 R. S. Belcher’s debut novel, The Six-Gun Tarot, was enthusiastically greeted by critics and readers, who praised its wildly inventive mixture of dark fantasy, steampunk, and the Wild West. Now Belcher returns to Golgotha, Nevada, a bustling frontier town that hides more than its fair share of unnatural secrets.

1870. A haven for the blessed and the damned, including a fallen angel, a mad scientist, a pirate queen, and a deputy who is kin to coyotes, Golgotha has come through many nightmarish trials, but now an army of thirty-two outlaws, lunatics, serial killers, and cannibals are converging on the town, drawn by a grisly relic that dates back to the Donner Party…and the dawn of humanity.


Sheriff Jon Highfather and his deputies already have their hands full dealing with train robbers, a mysterious series of brutal murders, and the usual outbreaks of weirdness. But with thirty-two of the most vicious killers on Earth riding into Golgotha in just a few day’s time, the town and its people will be tested as never before—and some of them will never be the same.


The Shotgun Arcana is even more spectacularly ambitious and imaginative than The Six-Gun Tarot, and confirms R. S. Belcher’s status as a rising star.


So I was a little lost in this book due to the fact I haven’t read book one but it didn’t take away from the book at all. In fact it made me want to go buy the first one and read it so I could re-read this book.

This is one of those books that is the whole package. It has a great plot, interesting characters that suck you into their world, fast paced action, and even laughter. So basically it has everything an amazing book should have in it. I enjoyed it so much that I started reading it with the intention of only reading for an hour before bed and got so wrapped up into this world that I stayed up to finish the book. I literally could not put this book down. I cannot wait to read the first book and do my re-read of this one. 5/5 Bloody Fangs 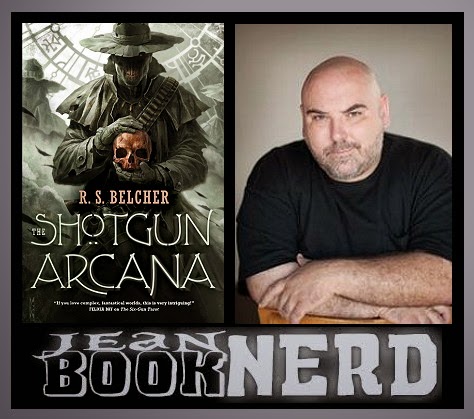 R.S. (Rod) Belcher is an award-winning newspaper and magazine editor and reporter. He has been a freelance writer for over a decade. He has written for local, state and international publications.

Rod has been a private investigator, a DJ, a comic book and game store owner and has degrees in criminal law, psychology and justice and risk administration, from Virginia Commonwealth University. He has done Masters work on a degree in Forensic Science at The George Washington University, as well as worked with the Occult Crime Taskforce for the Virginia General Assembly’s State Crime Commission.


Rod has written and edited for magazines like Starlog, Virginia Living, Virginia Business, Verve, and The Roanoker. He was managing editor of The Vinton Messenger newspaper and editor for numerous trade publications. He has done technical writing and has ghost-written political editorials and advertising copy. Both the politics and the advertising greatly honed his fiction writing skills.


He has been a writing guest at numerous conventions and writing conferences for many years. He is available for Bar Mitzvahs…


Rod began writing stories when he was 9 years old, selling stories and self- drawn comics to his mother’s beauty shop customers for a quarter a piece. That first quarter was the start of his road to Hell…


In a creative writing course he was selected for in 6th grade, Rod was told his SF/Fantasy writing was “silly trash” ( kinda true, but hey, I was in sixth grade…) but the lack of support from an adult “expert” made him feel like he couldn’t “really write” and he stopped writing for a few years. Thanks to the love, encouragement and support of his mom, Mabel, Rod started writing again when he got a typewriter for his 12th birthday. Thanks Mom.


You can write. Yes, you. You have a story, maybe a bunch of stories inside you screaming to be let out. Don’t let anyone tell you can’t write, or that your writing is no good. It’s good for you, good for the thing inside you that demands you get that story out somehow. Don’t write for praise, or for money, write for you, only you, and to hell with the rest of them.


He was once told by Elizabeth Taylor, he was “hot” and once told by George Takei he “looked terrible” ( he did). He watched a man die in the electric chair, investigated homicides, pissed off politicians and located missing children. The CIA told him to “clean up his act”- this was one of his proudest moments.


In his spare time ( which he has damn little of these days), Rod enjoys reading, hiking, shooting, gaming ( mostly tabletop RPG or board games, but some console), comics, researching the weird, spending time with his amazing kids, and long, thoughtful, walks in the rain…OK, the last one is crap, but the rest is true.


He lives in Roanoke Virginia with his children: Jonathan, Emily and Stephanie, Three cats and two dogs.


1.     Killer on the Road by Ginger Strand
2.     The Emperor's Blades by Brian Staveley
3.     The Thieftaker series by D.B. Jackson
4.     The Blackfire Concerto by Mike Allen
5.     Doctor Sleep by Stephen King
6.     George Washington's Secret Six by Brian Kilmeade and Don Yaeger
7.     The Monuments Men by Robert M. Edsel
8.     Fangtabulous by Lucienne Diver
9.     The Secret Architecture of our Nation's Capital by David Ovason
10. The One Percenter Code by Dave Nichols