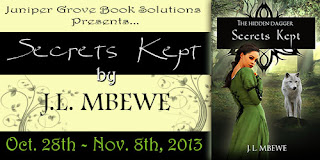 Today on my blog I have the Secrets Kept tour. On my stop there is a spotlight, excerpt, and giveaway. 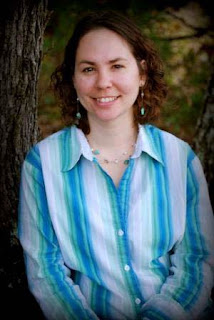 Writing as J. L. Mbewe, Jennette is an author, artist, mother, wife, but not always in that order. Born and raised in , she now braves the heat of , but pines for the Northern Lights and the lakes of home every autumn. She loves trying to capture the abstract and make it concrete.

She is currently living her second childhood with a wonderful husband and two precious children who don't seem to mind her eclectic collections of rocks, shells, and books, among other things. While living life balanced between reality and dreams, she is creating worlds inhabited by all sorts of fantasy creatures and characters, all questing about and discovering true love amid lots of peril.

Her debut novel, Secrets Kept, is coming this fall, and in the meantime be on the lookout for a few short stories set in the World of Nälu. 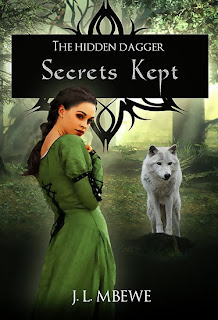 With a curse, she will build an army.

With the dagger, she will undo the last sacrifice.

But first the sorceress must find the secret keeper.

Torn from her homeland and thrust into a betrothal against her wishes, Ayianna learns her family has a deadly secret that now has her on the run. She joins forces with Kael, an embittered half-elf, and Saeed, an elderly High Guardian, to seek answers to her father’s death, the destruction of Dagmar, and the plains people’s bizarre behavior.

Ayianna discovers there is more at stake here than just her mother’s disappearance and her familial duty to her betrothed. The sorceress has cursed the plains people, and it is a race against time to release them before the sorceress resurrects an ancient evil.

Excerpt:
Leaves rustled, and the bush’s slender limbs shuddered. Shadows veiled the intruder; the light of the lantern unable to penetrate the layers of dry leaves and stems. Ayianna peered closer, and a dark mass burst out of the bush toward her face. She flung her arms up. The milk pail slammed into her head, and its warm contents splashed down her face, neck, and clothes. The lantern rocked on its hinge, the flame flashing and flickering wildly. The intruder screeched and a rush of wings brushed against her skin.
Ayianna lowered her arms. A large bird ruffled its dark feathers and made to settle its wings, but one hung at an odd angle. Its round, ebony eyes ogled her.
Could it be?
“Fero?” she asked. “Is brother home already?” She glanced around, but her eyes failed her in the half-light. Her wet clothes clung to her skin, and the breeze grew colder. She shivered and glared at the bird. “Brother or not, look what you made me do? Now, I’ve got no milk, and I’m all wet.”
Fero jerked his wayward wing back and hissed.
“Are you hurt?” Ayianna lifted the lantern, and its glow poured over the falcon, revealing dark stains on his ribbed underbelly. She reached out to touch him, but he gnashed his curved beak at her. The branch shifted, and the bird thrashed about trying to regain his perch, but then he broke free and soared haphazardly into the red-tinged sky.
Atop the bush, a strip of cloth fluttered where Fero had sat. She tore it free. The fabric was damp, soiled, and stunk of decay. It stained her fingertips red. Blood?

Thank you for stopping by my blog today. I would also like to say Thank You to Jaidis for letting me participate in this tour. Don't forget to enter the giveaway below.
~Sabrina

a Rafflecopter giveaway
Posted by Sabrina's Paranormal Palace at 12:00 AM