Sins of the Fallen by Daniele Lanzarotta

I am so excited to have Hunter from Academy of the fallen on the blog today but before we talk to him let's see what the book is about and get to know the author Daniele. 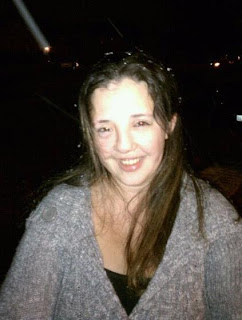 Daniele Lanzarotta is the author of YA paranormal novels, including the Imprinted Souls Series and Academy of the Fallen.

She has a bachelor's in business and finance and a MBA. With only a few semesters left in school, Daniele started writing as a hobby, but it didn't take long for her to be consumed by her stories. That is her passion, and she now has several projects under way.

She enjoys reading and writing young adult novels with just about any sort of paranormal or supernatural bent...vampires... ghosts... She also enjoys watching hockey, playing rock band, guitar hero and spending time with the family. 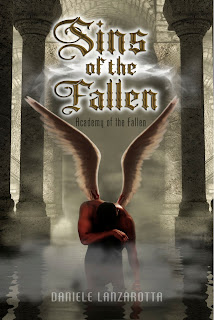 Synopsis (my character wrote it):
Hunter
I knew how much Kayla had changed over the past few weeks, but it was nothing compared to what I had seen in her from the moment we stepped into this place. The Kayla from before she learned about this world, was gone. She was already attached to some of their kind and I could see that she felt as if it was her responsibility to protect them all, the haunted and the fallen. She was starting to put them before her in every decision she made. It started sometime before we left the Academy where her father is in charge. After her incubus half-brother and his allies attacked the Academy, we managed to leave and take shelter here. Only, everything about this place is completely different. Many of the beings that live here have earned back the privilege of being full-blooded angels. Well, some say that is a privilege; others see it as a curse. Either way, the place itself had already started to become my very own curse. From the moment Kayla stepped foot in this place, I could see her change complete faster and faster. This Academy was giving her the confidence to be who she was meant to be, and deep down, I knew it was only a matter of time before I would no longer be needed in her life. It may sound selfish, but as Kayla started her journey to save those who were left behind, I was fighting for her. I was fighting to be worthy of a Nephilim.

Excerpt:
I grabbed her hand and slid the ring on her finger. "This is a promise ring. A while back I read about how protectors used to give a ring like this as a promise of loyalty to the person whom they chose to protect." She bit her lip and smiled as she looked at the ring. "This one is different than the others though." "Is it?" she asked. I nodded. "This one is different because of what it represents. I'm promising you more than my loyalty as a protector. I promise you that I'll find a way for us to be together without my immortality getting in the way. I promise to protect you not just from the things in this  world, but human things too. And I promise you everything that -" I shook my head and smiled because I couldn't believe I was doing this, and again, I had never been so scared. "... and whether you want me to or not, I promise you everything that the other ring that shall remain unspoken of represents."

Favorite Quote:
"Is she the Nephilim?" He looked me up and down. "There is no amount of training that will keep her safe. Look at her! She is - she looks like a Barbie doll who got snatched from her dream house."


I was so excited to read this book when I found out it was from Hunter’s point of view and then I saw the cover and was even more in love with this book.

I have been wanting to get my hands on this book since I finished Nephilim months ago and it did not disappoint me. Kayla does a lot of growing up in this book. She is not just some weak sixteen year old girl. She knows she is the only one who can defeat her brother Benjamin and save the fallen from the demons. She is getting stronger and learning how to harness her powers. But not everything is going good in her world. Kayla is having a lot of doubts about her relationship with Hunter. She doesn’t know how they will work when he is immortal and she will grow old and die. We also meet another Nephilim named Samuel with a serious attitude problem who wants nothing to do with the fallen but he has to help train Kayla. But through all this Hunter stays by Kayla’s side and even makes a promise to her.

I loved this book so much. We get to see a whole other side to Kayla and see just how strong she is. I felt her pain in dealing with her relationship issues with Hunter. She loves him so much but she struggles with him being immortal. And Hunter there is no words I can say that fit him. I have loved him since book one and each book he gets more of my heart but this one made me fall in love with him completely.  When he tries to fix his immorality it back fires and causes more harm and we really get to see the love Kayla and Hunter have for one another. I enjoyed getting to know more about the side characters in this book. We really get to see how they will help Kayla defeat her brother.

But I am going to warn you if you have read any of Daniele’s books then you know she is the queen of cliff hangers and this book is no different. It left me with my mouth hanging open and desperately needing the final book now to see how it all ends. This has become one of my best reads of 2012 and if you haven’t read this series yet then I hope you do. I promise you won’t be sorry. 5/5 Bloody Fangs

Interview:
Welcome Hunter, for those who don’t know you well tell us a little about yourself.
Hunter: Thanks Sabrina.  I’m happy to be here. For those who don’t know me well, my name is Hunter Chambers.  A few years back I died and was brought back by a fallen angel, which made me immortal.  I’m now 17 and live in a place that I hate more than anything: the Academy of the Fallen… but that doesn’t really matter.  I’d live anywhere as long as Kayla is with me.

Will you always look 17 since your Immortal or will you just age slower?
Hunter: *Sighs* Yes, I’ll always look around this age.  When I became immortal I was told that I would continue to grow until I became an adult.  Then I would just stay like that.


Why do you dis-trust everyone at the Academy?
Hunter: They all fell for a reason and then they were forced into this form of rehabilitation.  My past experiences with them were just not great.  Just look at how they use Kim for her powers and how much they expect Kayla to give up for them.  It’s not fair that Kim and Kayla have to sacrifice so much because of the mistakes made by the fallen.

Do you think Kayla has what it takes to defeat her brother Benjamin?
Hunter: I’m not sure if this is a good thing or bad, but I really believe that she does. I wish I could be the one to defeat him so she could stay out of this mess all together, but I’ve come to accept our reality.

Do you have any special powers being Immortal that we haven’t seen yet?
Hunter: In a way, yes, I do.  There is something about me being immortal that can be viewed as a special power, but that is all I can tell you for now.


I know you want to try and find a way for you and Kayla to be together, but why would you believe Samuel about letting a succubi drain all your life to become mortal?
Hunter: That was stupid, wasn’t it?  I guess I talked myself into believing that would work because I needed to believe that there is hope. Honestly, I’d try just about anything to make that happen.


I know you hate being away from Kayla for to long so I’ll wrap this up by asking if you can give us any hints about what happens next?
Hunter: I can tell you that there are things in my future that I’ll hate more than anything else and that my dislike for the fallen will resurface.  Oh, and that promise that I made to Kayla, well… I meant every word of it.  I just hope that I can make good on that promise one day.


Thank you Hunter for stopping by today and letting me interview you.
Hunter: Thanks for having me.

I wanna say Thank you to Daniele for letting me review her book and Thank you to Hunter for taking time away from Kayla so I could interview him.
~Sabrina
Posted by Sabrina's Paranormal Palace at 1:01 AM