Hello Book Lovers! today on my blog I have the Fat Angie Rebel Girl Revolution tour. On my stop there is a spotlight, review, guest post, and giveaway. 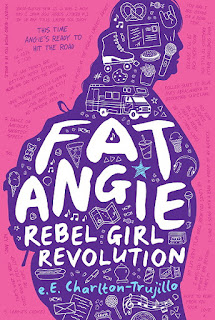 More trouble at school and at home — and the discovery of a missive from her late soldier sister — send Angie and a long-ago friend on an RV road trip across Ohio.
Sophomore year has just begun, and Angie is miserable. Her girlfriend, KC, has moved away; her good friend, Jake, is keeping his distance; and the resident bully has ramped up an increasingly vicious and targeted campaign to humiliate her. An over-the-top statue dedication planned for her sister, who died in Iraq, is almost too much to bear, and it doesn't help that her mother has placed a symbolic empty urn on their mantel. At the ceremony, a soldier hands Angie a final letter from her sister, including a list of places she wanted the two of them to visit when she got home from the war. With her mother threatening to send Angie to a “treatment center” and the situation at school becoming violent, Angie enlists the help of her estranged childhood friend, Jamboree. Along with a few other outsiders, they pack into an RV and head across the state on the road trip Angie's sister did not live to take. It might be just what Angie needs to find a way to let her sister go, and find herself in the process.


“Total Ferris Bueller, man. I needed a mental health day, yo.” Wang to Angie after ditching

“It’s a bad feeling. Panic. Because sometimes, you just can’t explain it.” Darius to Angie

“You can live your life in the shadow of a dead girl, or you can run screaming out of it. And let them all know you’re here.” Jamboree to Angie

“I am exponentially happy.” Angie to Jamboree

“What would Ms. Joan Jett do?” Angie

“I’m staring at this thing . . . this stoma on my side and hating myself. And then . . . I just named it. I was like, screw it. I’m being friends with this thing. It’s cute in a reddish-pink, part-of-your-small-intestine-sticking-out way.” Zeke to Angie

Review:
I went into this book not knowing it was a sequel so I was a little lost but it didn't confuse me so much that I couldn't enjoy this book. If anything it peaked my interest to buy the first book so I can read it and then reread this one.

I really liked this book but it does deal with some important topics such as bullying and a hostile home enviornment. It was hard to read how Angie is treated by her mom and some classmates and the author handled them well. Even though it is hard hitting with these topics it  does end on a postive note. Angie has mental issues, she is over weight, and she is queer but what really makes her special is she is resilient. I just loved her. This story is so authenic and I think so many people can connect to it. I highly recommend this book as everyone needs to meet Angie and hear her story. 5/5 Bloody Fangs

In this companion to the Stonewall Award–winning Fat Angie, Angie’s girlfriend has moved away, Angie is constantly bullied as she starts as a sophomore after repeating her freshman year, her mother still can’t stand her, and her former best friend, Jamboree, is back in town...it’s still good to see Angie, a very human combination of neuroses, fears, truths, and desires, break through some of her defenses and take risks, from singing to loving. ―Publishers Weekly 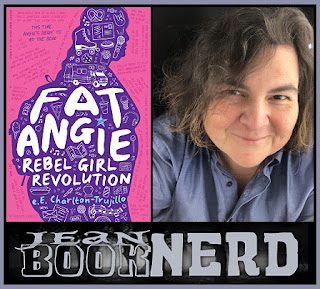 Deemed a “force of nature” by Kirkus reviews, Mexican American author, filmmaker, playwright and poet e.E. Charlton-Trujillogrew up in small-town Mathis, Texas.
As an author, she is the recipient of the Delacorte Dell Yearling Award for her first novel, Prizefighter En Mi Casa. What followed was: the Parents’ Choice Silver Honor, a Flamingnet Top Choice Award,a National Council for the Social Studies Notable Book and made the NYC PublicLibrary Teenage List. Check out the Reviews on Amazon.com
Her second novel Feels Like Home released to critical praise and award nominations.
It was her third novel, Fat Angie that garnered the American Library Association’s Stonewall Award, was a Lambda Literary Finalist and a Choose to Read Ohio book. Fat Angie was also the foundation for a unique book tour to empower at-risk youth via writing and discussion and the catalyst for the feature documentary At-Risk Summer. From that experience, she co-founded a non-profit to bridge the gap between at-risk youth and artists called Never Counted Out.
Currently, she is completing the feature documentary, A Cultural of Silence for GLSEN Cincinnati, writing two novels and Fat Angie: Rebel Girl Revolution in early 2019.
Click the highlighted links for Meet At Human or The Pirate Tree’s interview about e.


Thank you for stopping by my blog today. Don't forget to enter the giveaway below.


~Sabrina
a Rafflecopter giveaway
Posted by Sabrina's Paranormal Palace at 12:02 AM