"You'll adore Gin, who's determined to apply her brilliant computer skills to the mysteries of love... and in doing so, finds herself caught up in high-stakes intrigue. We cheer her on as she learns to trust her gut and heart along with her tech-savvy mind. CROW FLIGHT is a soaring debut from an author to watch." ―Laura Resau, author of RED GLASS

"A timely, fun story that flies across the pages and into your heart. A romantic tale with intriguing content, Cunningham delivers a compelling read about the predictability of life and love. ―Donna Cooner, author of SKINNY and SCREENSHOT

"Crow Flight is a delicious novel. Gin has decided what her life should look like - and it involves logic, equations, computer models, coding, ambition, and over-achieving. An unexpected twist forces her to reconsider, and rather suddenly she finds herself in new territory - a path that calls forth the heart, the willingness to adventure, and most importantly, an effort at finding and honoring the immaterial truth. When an English teacher asks her to consider Victor Hugo's contention that 'One must have bread, but before bread, one must have the ideal,' she boldly launches forth into a world of discovery, romance, and danger. This book, like Gin's adventure, is a beauty." ―Laura Pritchett, winner of the PEN USA Award in Fiction 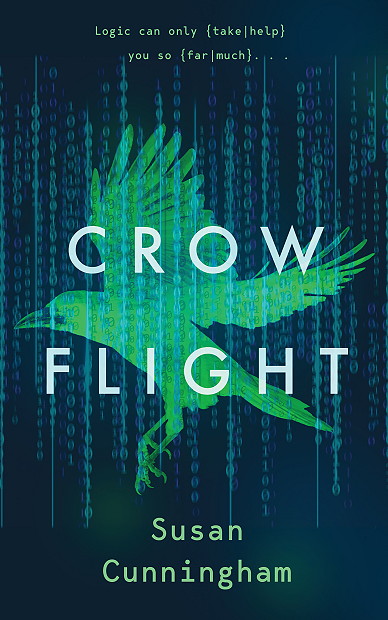 The curious flight patterns of crows lead a teen computer programmer down a path of mystery and romance.

Gin trusts logic a little too much. She even designs programs to decide what to eat and how to spend her time. All that changes when she’s paired with a new transfer student, Felix, on a computer modeling assignment to explain certain anomalies in the behavior of crows.

As she enters Felix’s world and digs further into the data behind crow behavior, Gin uncovers a terrible secret. And the wrong decision could equal disaster squared . . .

CROW FLIGHT EXCERPT TWO:
The quiet wrapped around them for a second. This field, tucked away from busy roads and surrounded by trees, felt as still as the Old Pond. And Gin felt like the frog, poised to jump.
“So . . . you like crows?” It was not at all how she had planned to broach the topic.
The smile hit his eyes first, then the corners of his lips angled up, those lips that were somehow always slightly puckered. And he grinned.
He crossed his arms and in that second, with a crow on each shoulder, he looked like some strange medieval prince. Or a king. Someone from an old Norse legend, who ran around with crows and wolves and conquered lands with his bare hands.
She breathed in deep, and it smelled like wet ground and geese and gray skies.
“Yes, I like crows.” His answer didn’t sound silly or condescending but seemed genuine. “Actually, I train them. Want to see?”
She tried to consider the offer, to tease out what Decider would say. Situation: In a strange field with a strange boy and his trained crows. Decision: Stay or go?
But instead, she stood by Felix’s side, close enough to see what he was doing, but not too close to scare the crows. Because she was certain she would scare them. They were right there on his shoulders, and she was so near, she could reach out and touch them. Glossy bodies like bundles of energy. Stocky with compact muscles. Onyx eyes that blended in with their midnight feathers but caught the light and shone.
The crow closest to her tilted its head to the right and held Gin’s gaze.
“This is Maggie.” Felix pointed to the bird that was watching Gin. “And this is Frederick.” He pronounced it “Free-derick.”
“Maggie and Free-derick,” she repeated. “Good to meet you both.”
“They were doing some simple flights. But we’re about to practice retrieval. It’ll only take a few minutes. Ready?”
At first, she thought he was talking to the birds, but his eyes, with their flecks of green and gold, were still locked on hers. “Ready.”
He straightened his body and touched each bird on the head. They immediately stilled. He whistled two low tones—Phee-Phaa—and the birds were off. Wings beating fast, moving them farther and farther away, until they had disappeared over the trees at the far edge of the field.


There was a breeze, soft and cool, and Gin pulled her sweatshirt around her tighter. Her nose felt iced, and her hands ached. A plane flew across the sky and for a second, she imagined the rows of people tucked neatly inside, watching movies and sipping sodas. No idea they were flying over a boy training crows.

You can purchase Crow Flight at the following Retailers: 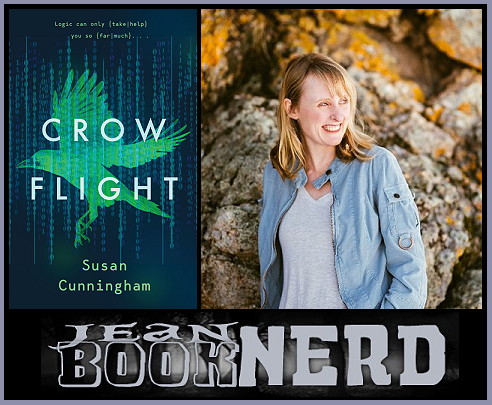 Susan Cunningham lives in the Colorado Rocky Mountains with her husband and two daughters. She enjoys science nearly as much as writing: she’s traveled to the bottom of the ocean via submarine to observe life at hydrothermal vents, camped out on an island of birds to study tern behavior, and now spends time in an office analyzing data on wool apparel. She blogs about writing and science at susancunninghambooks.com.

*JBN is not responsible for Lost or Damaged Books in your Nerdy Mail Box*
a Rafflecopter giveaway
Posted by Sabrina's Paranormal Palace at 12:07 AM