Today on my blog I have the Steal the Stars tour. On my stop there is a spotlight, excerpt, review, and giveaway. 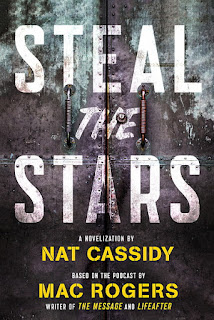 Dakota “Dak” Prentiss guards the biggest secret in the world.

They call it “Moss.” It’s your standard grey alien from innumerable abduction stories. Moss still sits at what looks like the controls of the spaceship it crash-landed twenty-five years ago. A secret military base was built around the crash site to study both Moss and the dangerous technology it brought to Earth.

It’s love at first sight—which is a problem, since they both signed ironclad contracts before joining the base security team, vowing not to fraternize with other military personnel. If they run away, they’ll be hunted for the secret they know. So Dak and Matt decide to escape to a better life on the wings of an incredibly dangerous plan: They’re going to steal the alien body they've been guarding and sell the secret of its existence.

And they can’t afford a single mistake.

Excerpt:
Your Favorite Quotes/Scenes from STEAL THE STARS

Nat: I don't wanna spoil too much, so I'll just say I think my favorite scene to write was when the Quill team first moves the Harp. As far as my process went, that was the first scene where I started to feel fully confident as the novelizer of this material. There are also some really lovely plot-things that happen in that scene which were a joy to investigate.


I am not a huge sci fi fan in reading but sometimes a book comes along and makes me change my mind and this book did just that. So now I want to read more books on aliens. However this one is done a little different as it's based off a podcast which I want to listen to since reading this book. While I was reading this book all I kept thinking about is Area 51 and X-files. This book has a lot of things going for it and it definitely drew me in from the start. 4/5 Bloody Fangs 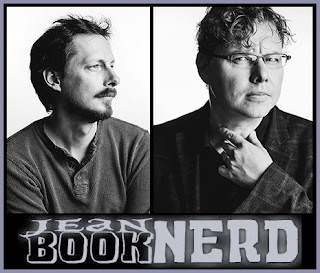 Nat Cassidy is an actor, director, musician, and playwright. He has appeared on shows such as The Following (Fox), The Affair (Showtime), Red Oaks (Amazon), High Maintenance (HBO), Law & Order: SVU (NBC), as well as on stage in numerous productions and workshops both Off- and Off-Off-Broadway. Nat’s plays have been nominated for a combined total of 17 New York Innovative Theatre Awards, including 3 times for Outstanding Full-Length Script (which he won in 2009, and in 2011 for Outstanding Solo Performance for his one man show about H.P. Lovecraft). In 2012 Nat was commissioned by The Kennedy Center to write the libretto for a world-premiere opera, and in 2014 his play Any Day Now was chosen to be part of Primary Stages’ ESPADrills (The Duke Theatre, directed by Tony-nominee Moritz von Stuelpnagel). He is also thrilled to be writing the novelization of Steal the Stars, which will be published by Tor Books in November 2017.
TWITTER | FACEBOOK | GOODREADS | WEBSITE |