Killing Is My Business Blog Tour

Today on my blog I have the Killing Is My Business tour. On my stop there is a spotlight, review, and giveaway. 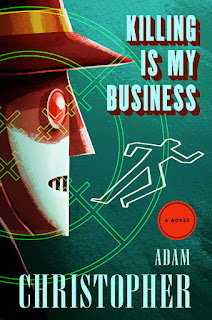 A blend of science fiction and stylish mystery noir featuring a robot detective: the stand alone sequel to Made to Kill

Another golden morning in a seedy town, and a new memory tape for intrepid PI-turned-hitman--and last robot left in working order-- Raymond Electromatic. When his comrade-in-electronic-arms, Ada, assigns a new morning roster of clientele, Ray heads out into the LA sun, only to find that his skills might be a bit rustier than he expected....

Killing is My Business is the latest in Christopher's noir oeuvre, hot on the heels of the acclaimed Made to Kill.

Review:
Science Fiction is usually not my genre but when I saw that this book is about a robot who was a detective and is now a hitman oh and the last remaining robot at that. I knew I had to give this book a try and I am so glad I did. I really enjoyed this book. It kinda reminded me of a steampunk/dystopian book but whatever you want to call this genre bending book is fine with me as I had fun reading it. I really liked Ray. He has to have his memory wiped every night as he can only hold 24 hours of data so he wakes up everyday and has to relearn the world. I know he's a robot but it did kinda make me feel bad for him in a way. I would highly recommend this book as there is car chases, murder, schemes, mobsters, and a robot assassin. 4/5 Bloody Fangs

Praise for KILLING IS MY BUSINESS
"Hits hard, spins your head around, and leaves you stunned. The Ray Electromatic mysteries are so freakin’ perfect you’d think robot hitmen and retro supercomputers had always been part of noir fiction.”—Peter Clines, author of Paradox Bound and The Fold
"Humor, action, and heart: everything I've come to expect from an Adam Christopher book, and then some. A marvelous read!"—New York Timesbestseller Jason M. Hough, author of Zero World
“Delivers like a punch from a two-ton robot in a zoot suit.”—Delilah Dawson
"Atmospheric and charming as hell. Adam Christopher has an extraordinary talent for scooping you up and dropping you into an alternative LA that feels just as real as the street outside your house."—Emma Newman
Praise for the RAY ELECTROMATIC MYSTERIES
"Robot noir in 60s Los Angeles? You had me at 'Hello.'"—John Scalzi, New York Times bestselling novelist
"Gripping, funny, deadly and suspenseful."—Boing Boing
“Delivers like a punch from a two-ton robot in a zoot suit.”—Lila Bowen (aka Delilah Dawson)
"The dialogue is effortlessly swift and clever, and even the B-movie climax is a spectacle to behold. Above that, though, Ray sparks to live, and his antiheroic slant only makes him that much more compelling and and sympathetic. Knowing that there are only two more Raymond Electromatic mysteries to come is the book's only disappointment."—NPR
"Genre mash-ups don't always succeed, but this one will please fans of both gumshoes and laser beams."—Publishers Weekly
"A fun, fast read for anyone willing to take the speculative leap--a must-add for most fiction collections."—Booklist (starred review)
"Made to Kill is yet more proof that we should all be thankful for Adam Christopher and his imagination. This tale of robot noir is unlike anything I’ve ever read—Adam’s is a weird and wonderful voice and we are lucky to have it."—Chuck Wendig, New York Times bestselling author of Aftermath
"Adam Christopher has brilliantly deduced what should have been obvious all along: Classic noir and robots are a perfect match. Part Chandler, part Asimov, and part Philip K. Dick, Made to Kill is a rip-roaring cocktail of smart, sharp, twisty, cyber-pulp awesomeness."—Adam Sternbaugh, author of Shovel Ready
"Made to Kill is just the sort of exciting genre collision that marks out Adam Christopher as one of the hottest new young SF writers."—Paul Cornell, author of The Severed Streets
"A smart, rollicking noir/SF mashup. One of the best books I've read all year."—Kelly Braffet, author of Save Yourself 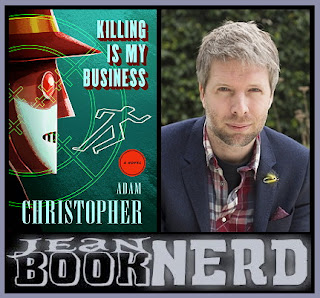 Adam Christopher’s debut novel EMPIRE STATE was SciFiNow’s Book of the Year and a Financial Times Book of the Year. The author of MADE TO KILL, STANDARD HOLLYWOOD DEPRAVITY, and KILLING IS MY BUSINESS, Adam’s other novels include SEVEN WONDERS, THE AGE ATOMIC, and THE BURNING DARK.

Adam has also written the official tie-in novels for the hit CBS television show ELEMENTARY, and the award-winning DISHONORED video game franchise, and with Chuck Wendig, wrote THE SHIELD for Dark Circle/Archie Comics. Adam is also a contributor to the STAR WARS: FROM A CERTAIN POINT OF VIEW 40th anniversary anthology.

Born in New Zealand, Adam has lived in Great Britain since 2006.


~Sabrina
a Rafflecopter giveaway
Posted by Sabrina's Paranormal Palace at 1:04 AM