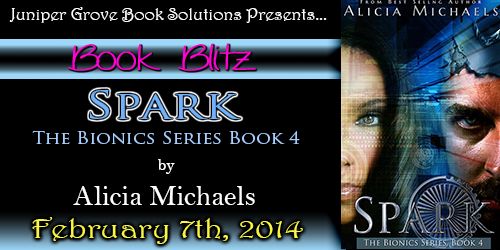 Today on my blog I have the Spark, The Bionics book blitz. On my stop there is a spotlight, excerpt, and giveaway. 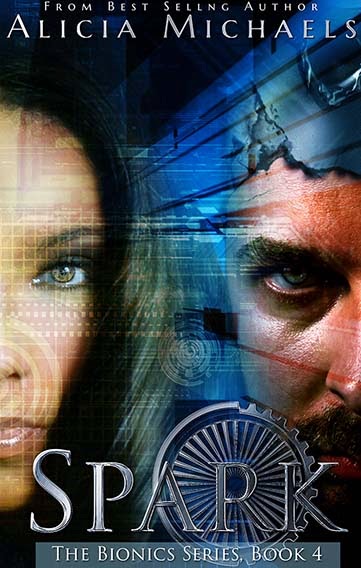 Most nineteen-year-old girls are thinking about college, stretching the wings of newfound adulthood, and boys. Well, I’ll probably go to college and all my dreams of the future are gone. I’ve been adult for much longer than I should have been and my girlhood was stolen the minute the North Koreans dropped their nukes over the . As for boys … well, that’s pretty much out of the question now, too. My love life is too messy to even talk about.

Except, maybe, my cause, my mission, The Resistance. It is the hope I have to cling to, I am counting on it to pave the way to my future. As things heat up and the terrorist sect known as The Rejects make themselves known opponents of society in this war, the choice to be on the side of good is harder than ever. My friends are broken; Olivia is a shell of her former self and Jenica is barely hanging on. Dax and Gage … well, we’re not talking about my love life, remember?

The Rejects, the government, President Drummond; they are pressing in on us from all sides and the weight tremendous. Still, when given the choice to crumble or stand, I’d rather stand. Times are dark, but we are here, a rebellion, a whisper in the dark, a spark that lights the flames of change.

With weapons in our hands, we’ve managed to even the playing field. Still, the Rejects fight with a ferocity that we just cannot match without becoming monsters ourselves. Even now, our side chooses stunning in favor of killing. The ionized cuffs are whipped out as soon as they go down, chaining their prostrate bodies together as they lay unconscious. The issue of what to do with them comes later. The few we have killed are ignored; a necessary evil committed when there is no other choice.
My body goes into fight mode, and all thought is lost. Muscle memory takes over as I fight any and everything in my path. Bones and cartilage snap under my hands, and my well-fired lasers stun one after the other. My concentration is only broken when pain jolts my human arm and explodes in my chest. I glance down to find a jagged tear in the arm of my flight suit and blood welling in a gash going down my bicep, almost to the elbow. The red, sticky liquid oozes down to my fingertips and drips onto the street. I turn to find Baron standing nearby, the long blade that’s attached to his bionic arm speckled with my blood.
“Hello, love,” he says, his Aussie accent thick with sarcasm. “Always a pleasure to see you.”
I level my gun at him and take a shot, but he deflects the single laser with a slash of his blade. It bounces off and disappears somewhere into the fighting mob surrounding us.
“Now, now,” he says, clicking his tongue in admonition. “How very rude of you. I didn’t shoot you. Honestly, love, I thought you and I had a connection.”
“Never!” I hiss. “I am nothing like you!”
He scoffs. “You and I are more alike than you could ever imagine, love. I really do like you, but if you don’t get out of my way, I’m going to have to hurt you more.”
I raise my bloodied arm and curl my hand into a fist. “Retract that blade so I can beat the shit out of you.”
Baron smiles, and insanity glows in his eyes. “Gladly.”
The blade is gone and he lunges at me, a sneer fixed on his face. I race forward to meet him, ducking as he throws the first punch. My leg sweeps out to knock his feet out from under him, but as he goes down, his legs capture mine and twist, taking me with him. He’s over me in a flash, hands wrapped around my throat and choking off my air supply. Remembering my training, I wrap my legs around his waist. Grasping the lapels of his jacket, I roll him off me and switch our positions, straddling him and bringing my titanium fist down on his head. His metal-domed head hits the ground and bounces off, unhurt. Anger clouds my vision as I think of the people in that video being burned to a crisp and children being thrown from a roof. A sound like an enraged growl burns in my chest and escapes my throat as I punch him again and again, the clanking sound of metal against metal resounding as I pound against his head. Baron’s head bobbles like a rag doll and then snaps left as I pound his jaw with a powerful right hook. Blood sprays from his mouth and a tooth goes flying. Typically, a punch in the face from my metal hand can render a person unconscious. Apparently, crazy people are more resilient than others are. A spray of red fills my vision, and I’m torn between being pissed off or grossed out when I realize that Baron has spit blood in my face. Blinking to see through the crimson gore dripping down my face like bloody tears, I don’t see it coming when his head—now dented from my assault—races up toward mine.
My head snaps back, pain explodes through my head and down my spine, and I fall to the ground in a heap. Swiping at my eyes, I cannot muster the strength to lift my head, let alone stand. I can feel my body trying to slip into unconsciousness, but fight it with everything in my being. To lose consciousness now will mean death. Baron stands over me and clenches the fist of his bionic hand, causing the blade to slip out again. He raises it high and sneers down at me.
“If you don’t wish to be a part of the new world order, then you must be eliminated. I won’t allow anyone to stand in my way. Not even you.”
I glare at him and try to raise my head, wincing as I realize some of the blood trickling down my head is my own. There’s a huge gash on my forehead. “How could you do this? You’re ruining the only chance our kind has left of becoming part of society again.”
Baron laughs. “Why would I want to be part of society when I could rule it? That’s the problem with you fools in the Resistance. You don’t see the bigger picture.”
My heart pounds in my chest as he brings his arm down, the blade racing toward me. I muster enough strength to roll out of its path once. The blade scrapes against the gravel and he lifts it again, laughing as he prepares to take my head off with a single blow. 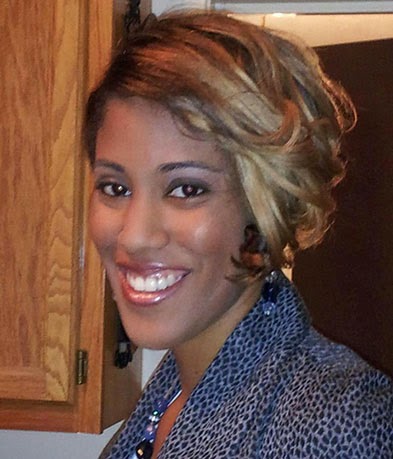 Ever since she first read books like Chronicles of Narnia or Goosebumps, Alicia has been a lover of mind-bending fiction. Wherever imagination takes her, she is more than happy to call that place her home. The mother of two and wife to an Army sergeant loves chocolate, coffee, and of course good books. When not writing, you can usually find her with her nose in a book, shopping for shoes and fabulous jewelry, or spending time with her loving family. Thank you for stopping by my blog today. I would also like to say Thank You to Jaidis for letting me participate in this book blitz. Don't forget to enter the giveaway below.
~Sabrina
a Rafflecopter giveaway
Posted by Sabrina's Paranormal Palace at 12:09 AM