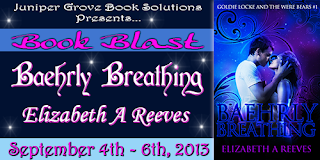 Today on my blog I have the Baehrly Breathing Book Blast. On my stop there is a spotlight, excerpt, and giveaway. So let's get started and meet the author Elizabeth. 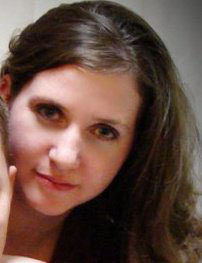 Legend has it that Elizabeth A Reeves was born with a book in her hands and immediately requested a pony. Though this story is questionable, it is true that books and horses have been consistent themes in her life. Born in , she was quickly transplanted to by a professor father and creativity-driven mother, who is the one responsible for saying “If you can’t find a book that you want to read, write a book you want to read.”
In her spare time, she likes to knit, weave, hatch chickens, and chase after her husband and four sons. 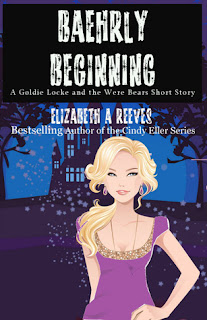 A short story introducing sassy and spunky Goldie Locke and her menagerie of magical and rare creatures. Witch Goldie Locke's mission in life is the rescue and rehabilitation of endangered Magical creatures. She will put her life and all she has at risk to save them. 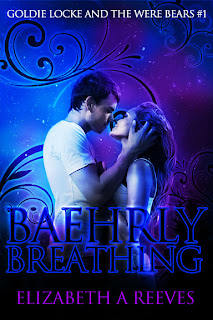 The first book in the Goldie Locke and the Were Bears series.
It’s difficult to be taken seriously when you are a member of the Magical community and saddled with the unfortunate name ‘Goldie Locke’. It certainly doesn’t help if you are also about five feet tall, blond, and most commonly described as ‘cute.’ What was a girl to do?
Become one of the most dreaded Magical environmental lawyers of all time?
Goldie isn’t there yet, but she’s well on her way when a case drags her into uncharted territory– working with Ordinary officials to figure out why ‘unusual’ remains are being discovered all around .
With her hands full and a new dragon on the way, Goldie’s hunches about this case may prove to be all-too true– this stuff is bad business!


It’s difficult to be taken seriously when you are a member of the Magical community and saddled with the unfortunate name ‘Goldie Locke’. It certainly doesn’t help if you are also about five feet tall, blond, and most commonly described as ‘cute.’ What was a girl to do?


Become one of the most dreaded Magical environmental lawyers of all time?
Well, I wasn’t there quite yet, but I was well on my way.
I stared up my nose at the frowning specter of a Mage. I wondered if he had any ogre blood in his lineage, for he was exceptionally tall, had quite a lot of girth, and had the most bulbous nose I had ever had the misfortune to meet.
Moments like this I really wished I was over six feet tall, male, and named Marmaduke. Then I would have been taken seriously.
I figured anyone named Marmaduke had to be pretty kick-ass if they survived to adulthood.
The ogre was actually laughing at me.
“What makes you think a tiny thing like you can just waltz in here and tell me what to do?” he demanded, his face turning an ugly shade of mauve that really didn’t go well with his rather orange hair, what there was of it.
I put my hands on my hips. “I suggest that you cooperate,” I told him. “You have been commanded by the Council of Magic to release into my custody the illegal specimen you have in your possession.” I waved the writ at him, but he just shoved it away with an unpleasant laugh.
“The council sent a speck like you to enforce it?” he roared.
“Hey,” I protested. “I know I’m cute, but that doesn’t mean you shouldn’t take me seriously.”
“How about I smash you flat?” His piggy eyes glowered at me. “Is that serious enough?”
Yup, he definitely had ogre in him.
“Don’t mess with me,” I warned.
In response he took a lumbering swing at my head.
In a flash I was out of his range and had the tip of my sword tucked neatly underneath one of his massive earlobes.
“I suggest,” I said sweetly, “that you don’t move.”
He made a growling sound, but let his shoulders slump.
“Good choice,” I said, sheathing my sword again. “If you don’t like my blade you would really hate my magic.”
“Witch,” the ogre spat.
“Thank you,” I answered, flattered. “Now may I please have your cooperation?”
For a second I thought I was going to have to kick his butt again, but he turned away from me grumbling, and led the way into his dwelling.
Not everyone in the Magical Community lived in archaic squalor. I knew that, having grown up in a rather affluent home, but these days I seemed to deal more and more with the other side of my world—the dregs, as my bosses, the Baehr brothers, would have called them.
I tried not to judge people or label them, but some things made it difficult.
The cottage was small and made of stone, with half a sheep’s head sitting on the table, a cleaver wedged into its skull. The whole interior of the cottage was damp and sporting a large array of moss.
“Love what you’ve done with the place,” I quipped.
“Huh?” the giant turned an eye towards me then shrugged. “Oh, uh, thanks.”
I gave him my sweetest and most genuine smile.
His ears actually turned a little pink.
He kicked open a door that looked like it led straight down into the cellar.
I’d been tricked before. “After you,” I suggested.
With a nod he barreled down the few stairs. Reluctantly, I followed him.
I wrinkled my nose. There was something both musty and sulfuric about the scent of the cellar and, despite the dampness above, it was parched dry and hot.
I’d never been one for standing close to a fire, and this felt like I was standing close to volcanic ash.
I fought the urge to loosen my collar. I knew the ogre-man was watching my every move and I couldn’t afford for him to stop taking me seriously. Things could get messy really fast with a big guy like this.
And I really didn’t want to wipe the floor with him if I didn’t have to.
He shuffled off into a corner and returned with his contraband—a huge, shiny green egg nestled into a makeshift nest of old leather and practically radiating heat.
Damn. It was a dragon’s egg.
I didn’t even want to know how this monster of a man had gotten his hands on one of the great rarities of the Magical world. Dragons were on the endangered creatures list—near the top, actually. There was a grand tradition of dragon hunting: spells containing objects such as scales and claws that made anything dragon a hot commodity on the black market. The dragon population on this side of the barrier that kept the Ordinary and Fae worlds separate was tiny and rather inbred. I’d heard that there was a large and healthy dragon population on the other side, but that was all hearsay.
I took a deep breath and counted to ten in Gaelic to quiet my temper. I hated it when people broke the rules. This egg—if it was viable—was going to cause someone a lot of trouble.
And that someone was always me.

I would like to Thank Elizabeth for being on my blog today and say Thank you to Jaidis for letting me participate in this tour. Thanks for stopping by my blog today. Don't forget to enter the giveaway.
~Sabrina

a Rafflecopter giveaway
Posted by Sabrina's Paranormal Palace at 1:36 AM