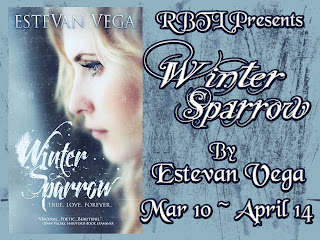 I am excited to be participating in this blog tour. Estevan has given some great excerpts. But before we read them let's get to know more about Estevn and his book Winter Sparrow. 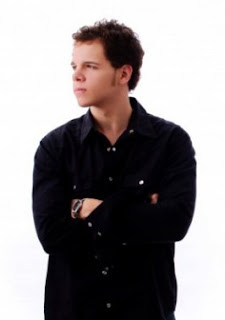 ESTEVAN VEGA FELL IN LOVE WITH STORYTELLING IN THE FIFTH GRADE WHEN HE WAS FORCED TO WRITE SHORT STORIES EVERY DAY FOR ENGLISH CLASS. THAT’S RIGHT, FORCED. BUT WITH A LITTLE HELP FROM HIS FATHER, HE REALIZED, HE ACTUALLY LIKED WRITING AND LOVED PEOPLE’S REACTION TO HIS WORK. NOW, AFTER MANY, MANY MOONS, EVEGA HAS AUTHORED 6 BOOKS AND SEVERAL SHORT STORIES ALL READY TO BE CONSUMED BY YOU. HIS HOBBIES INCLUDE SINGING IN THE SHOWER, GOING TO CONCERTS, AND TRYING TO ALWAYS EMULATE OPTIMUS PRIME. HE LOVES MINT CHOCOLATE CHIP ICE CREAM, WRITING PECULIAR TALES, AND STILL HASN’T LEARNED HOW TO WHISTLE. 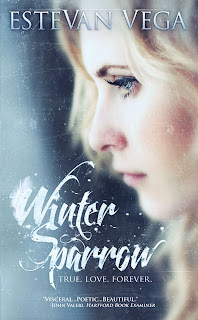 “I’ll grow wings all by myself.”
Mary is a young artist about to enter a new chapter in her life. After years of waiting and searching, she has finally found true love. She’s also just discovered that her fiancé Joshua has inherited his father’s rundown countryside mansion. To add to the rising pressure, her wedding day is so close she can practically hear the music. All she has to do is accept what the future holds. Accept…and be happy.
But something’s missing.
As the seasons change, her doubts turn to fears, and her fears become reality. Through struggle and loss, the love she once possessed for Joshua transforms into contempt. When Mary is confronted with a magical escape, the life she has and the life she dreams of will collide, awakening a mysterious change within. But no choice comes without cost, and each one will draw her closer to the truth.
At times both beautiful and haunting, Winter Sparrow dares you to step into a world where eternity is a moment and every breath is a second chance. The fantasy begins….

Excerpt:
Mary was taken from the porch for a moment. Her eyes drifted to the willow tree planted on the front lawn. Its roots stretched across the dirt-and-pebble driveway and a number of other spots around its formidable trunk. At first, Mary squinted to see what was carved at the center. She walked down the porch steps to get a clearer look. Joshua didn’t notice. He was busy jangling his keys and trying to break in out of frustration because the lock now refused to budge.
As she edged closer, the carving in the willow tree became clearer. It was a solitary word no one would raise a question about. A forgettable something, really. Nothing elaborate or poetic. Just simple, scratched into the bark. It read, Once.
Who put it here? she wondered.
Just then, Mary glimpsed a shadow from the road that led to their future driveway, which she could see herself pressuring Joshua to get paved as soon as humanly possible. The shadow captured her glance when she touched the tree, felt the cut-up pieces that comprised the fragile, infant word. She swore she saw a face too with the shadow. It was a man with a soft complexion and a beard. A black hat kept his long hair neat and tucked. He had on a lengthy coat as well, and his teeth appeared yellow, glistening in the moonlight as he smiled at her from the road.
But then he was gone. Suddenly, a fog drifted in from the woods, and the chill forced her to blink. And shudder a little. She turned on the spot and saw Joshua coming closer.
She reached for his arm.
“What’s got you all jumpy?” he asked.
“It’s awful dark out here.”
“Yeah. Looks like we’ll have to get used to that,” Joshua said. “Hmm, did you notice our voices echo out here too?” Without awaiting a response, he repeated, “Echo!”
“Stop it,” she demanded.
“Why?”
“Because you never know who could be out this time of night.”
Tell him, Mary. Tell him what you saw. Tell him you saw
a man, well, what looked like a man, with long hair and a beard and a black hat and….
That is what you saw, isn’t it?
“I got cold all of a sudden, Joshua. I want to head back now.”
“Okay,” he said, embracing her. “Let’s get you warm.” He unlocked the car with the keyless entry device.
Mary immediately went for the passenger door and sank into her seat, fastening her belt as tight as it would go. Joshua walked slowly, however, intensifying the tension inside her.
Just tell him what you saw.
Mary shut her eyes and pictured the garden. Maybe her mind had invented the man in black. Her mind had invented things and ideas before, so it wasn’t all that strange, was it? An imagination could be a dangerous thing, a very dangerous thing, the years had taught her.
Joshua opened the driver’s side door and slipped into his seat. He started the car and backed out. Mary looked out the window as a branch scraped the front hood. She couldn’t help but feel saddened by the carving there in the heart of the wil¬low tree. In a matter of seconds, they were backing out of the driveway, leaving the property of the mansion, and heading back to the city.

By the end of September, dawn resembled dark poetry. A spellbound earth sat behind the hills and clouds and dim but rising light. It was made new by irregular colors. The trees on the south end of the mansion flexed rebelliously out of the black dirt womb and created skinny branches. The shades of leaves faded. Mary imagined mutinous veins charging up the bark of its tree—the very same wires that showed the lifeline of every leaf that would soon slip off to die—as a nearly invisible force that plagued the world. The world was so unbalanced. When would she be able to explain the mystery of death? The mystery of change? Or perhaps no clean answer existed for why things were lost. Perhaps only the fallow grounds of the earth displayed the questions with similar unfinished lines.
Mary blinked and realized the sunrise had already come, and she had missed its final movement. She turned her gaze from the strange reality of nature to her still canvas—a pale, man-made thing desperate to come alive again with a fresh soul. Her paint¬ing had no beginning and no end. Where was her inspiration?
The light reaching down from a sky with no conviction seemed like a curse. There was no common ground in her, she knew that now more than ever. Maybe there had never been. She was purgatory, if such a wretched place could be conceived while wives were left empty.
The sounds of her husband hammering in the hallway less than fifty feet away encompassed her. Every time he swung against that drywall, she felt her brain brush up against her skull, wondering if ever he’d hit it hard enough to render her unconscious.
The center of her quivered at the thought of being reunited with him. He didn’t deserve to have her. Nor did the sky, with all of its apathy and neglect. Stuck in this spot. Stuck in this house. Stuck in this body with no life. Her roots had been planted deep, with no true comprehension that these grounds would seek to contain her for eternities no dream could compose.

Thank you to Estevan and RBTL for letting me participate in this blog tour.
~Sabrina

Posted by Sabrina's Paranormal Palace at 12:51 AM