I am so excited to be participating in the cover reveal for Megan Parker. I love the cover and can't wait to have it sitting on my shelf. Megan has also included an excerpt for us to hold us over until Scarlet Night releases. But first I am going to post the synopsis for you to read.


Zane’s horrific past is forever etched into his skin.
His anger and pain overcome his body and turns him into the beast he’s come to accept himself as. But, is there a way to save himself from the beast he has become?
Especially when the anger makes him feel complete…
****
Serena can’t let go of the past, and, in the spectral embrace of her murdered lover, Devon, she has little reason to...
Until Zane arrives on her doorstep (and blows it into splinters).
However, she can’t deny the true desire she feels in Zane’s strong embrace. Will she be able to resist Zane’s mysterious allure, despite her own budding passion?
Especially when the passion makes her feel complete…
****
As their personal pasts continue to haunt them, the future for them and their clan grows evermore in jeopardy of the malicious schemes of a familiar force.
Can an untamable beauty finally submit to her destiny, and can a slaughterous beast be swayed of its catastrophic nature?
Or will the lover and the fighter be doomed to lose themselves amidst the chaos?

Now for the cover reveal.... 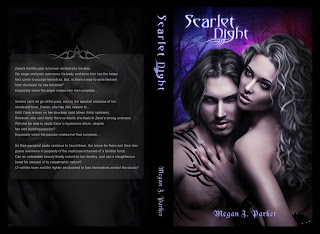 
Neither of them deterred, the darted through the bits of wood with their fists balled and ready. Two punches landed simultaneously and room slipped back into normal time as the two were knocked out of overdrive and across the room until they came crashing down onto the unforgiving hardwood floor.
Zane groaned and rolled to his knees, struggling to stand up and, when he’d finally gotten to his feet, grabbing his shoulder in pain. Wincing from the contact, he glanced at the floor and let out a heavy sigh at the sight of the massive crack that he’d put there when he’d fallen; two perfect indents showing where his back and shoulders and broken through.
He silently thanked Gregori for his vast wealth and the assurance that the damage would be easily repaired.
The sound of metal straining caught his attention and he looked towards opposite side of the room in time to see the one of the weapon racks—loaded with a series of Oriental swords and daggers and cracked in half down the middle from Serena’s fall—start to come unhinged. As he watched the collection of weapons start to shift, he watched as a short sword slipped free and stabbed into the floor several inches from Serena’s head.
And the rest were sure to follow!
Growling, he fought through his own pain and dizziness and rushed towards her, pushing his already-drained body into overdrive and struggling to maintain the superhuman speed as the room slowed around him long enough for him to snatch her body from the floor and hurling them both out of range of the slew of razor-sharpness that rained down behind them.
Zane groaned and blinked against his worn-out body’s blurring vision and saw Serena below him; pinned to the floor by his body.
Biting his lip at the compromising position, he hurried to pull himself off of her, hoping that she hadn’t gotten the wrong idea or done any damage in falling on top of her. The sound of another crash reverberated in Zane’s ears and he gritted his teeth as a second wave of falling weapons rang out and startled Serena into an upright position; holding her chest and coughing as she tried to catch her breath.
Zane sighed; at least she was safe.
He dropped his head to look at her, she was breathing softly and her chest lifted and fell in slow breaths. He chewed his lip as he realized he was staring at her chest still and turned his attention to her face. Her dark bluish-purple gaze was pulled into his and he frowned, realizing he’d been caught. She smirked and licked her lips. Realizing he was being teased, Zane looked away and growled.
“Like what you see?” She smirked.
How SEXY is that cover? And that excerpt is not nearly enough. I need the whole book now. I can't wait for it to release. Thank you Megan for letting me participate in your cover reveal.
~Sabrina
Posted by Sabrina's Paranormal Palace at 2:06 AM