Today on my blog I have the Firebrand blog tour. On my stop there is a spotlight, review, and giveaway. 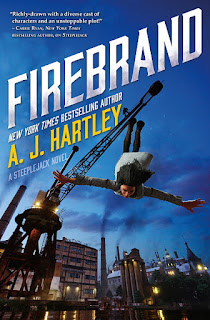 Once a steeplejack, Anglet Sutonga is used to scaling the heights of Bar-Selehm. Nowadays she assists politician Josiah Willinghouse behind the scenes of Parliament. The latest threat to the city-state: Government plans for a secret weapon are stolen and feared to be sold to the rival nation of Grappoli. The investigation leads right to the doorsteps of Elitus, one of the most exclusive social clubs in the city. In order to catch the thief, Ang must pretend to be a foreign princess and infiltrate Elitus. But Ang is far from royal material, so Willinghouse enlists help from the exacting Madam Nahreem.

Yet Ang has other things on her mind. Refugees are trickling into the city, fleeing Grappoli-fueled conflicts in the north. A demagogue in Parliament is proposing extreme measures to get rid of them, and she soon discovers that one theft could spark a conflagration of conspiracy that threatens the most vulnerable of Bar-Selehm. Unless she can stop it.

Review:
When I saw that the heroine is a spy I knew I had to read this book then you add in that this book takes place in Africa well and alternative Africa and I was hooked. I haven't read any books set there so I was excited to read this one and A.J. doesnt disappoint. I loved the main character Ang. She is what you want a heroine to be and I instantly connected to her from page one. As much as I love Ang and all the other characters what really had me hooked on this book is that A.J. added in issues with politics, race, and social class which is what we are dealing with today. But even with these issues being added not once did it take away from the story. I am definitely hooked and can't wait to see where this series goes. 4/5 Bloody Fangs

Praise for FIREBRAND
“Hartley creates a world so analogous to our ownit hardly seems like a fantasy....Anglet has blossomed in this sequel, releasing her previously restrained sharp tongue and expanding her emotional range. Even as she learnsto put on a neutral face to be a more effective spy, her empathy for those whoare suffering and her relentless search for the truth are her most laudable attributes. Readers who come for the tightly plotted mystery will stay for the heroine who does all she can to resist.” ― Kirkus Reviews, starred review
“The well-crafted adventures of this feisty, diverse protagonist continue in thisworthy sequel to Steeplejack (2016), evoking Sherlock Holmes with its Victorian-esquesetting, and James Bond in its espionage-laced plot. Hartley has composed another electrifying fantasy that buzzeswith intrigue and timely political and social issues, making this a must-have additionto any collection.” ― Booklist, starred review
“Expertly written, never preaching or pointing fingers, but subtly applying pressure toexamine race issues, gender inequalities, microaggressions, and socio-economicproblems in our culture…. Teens will see themselves in the tough, realistic, and fierce yet vulnerable protagonist. The multicultural worldbuilding will draw in readers of many ages and backgrounds, while the well-crafted mystery and action will keep them wanting more….A delightful follow-up to the explosive first novel from an established author who clearly knows his craft.” ―VOYA
“Hartley's story succeeds in building a detailed world of bothfamiliar (charging hippos) and unfamiliar (a precious mineral, luxorite, usedby the rich) elements while also tackling a wide range of complicated social issues....Most impressive is the genre-blending; the author adeptlymerges a political thriller with action, adventure, and mystery. Will have strong appeal to a wide range of readers, particularly those looking for complex novels that reflect a diverse world.”―School Library Journal
Praise for STEEPLEJACK
“A richly realized world, an intensely likable character, and a mystery to die for." ―Cory Doctorow, New York Times-bestselling author
“A thought-provoking blend of action and intrigue, with a competent and ethical heroine in Ang and a fully imagined setting whose atmosphere and cultural cues also play important roles. The result is an unforgettable page-turner built on surprises and full of potential.”―Publishers Weekly, starred review
“Skillful writing, masterful pacing, and a capable and quite likable female detective are just a few of the things to love about this fantasy-adventure....In addition to the detective angle, Hartley thoughtfully explores issues such as race relations, both inter- and intra-racial, as Anglet deals with the censure of her own community, and class issues, as she attempts to work outside the political system to solve the murder. This one won’t stay on the shelf for long.” ―Booklist, starred review
“Smart political intrigue wrapped in all the twists and turns of a good detective story makes for a rip-roaring series opener.” ― Kirkus Reviews, starred review
“With its unique South African-inspired setting, richly-drawn and diverse cast of characters, and unstoppable plot, readers of any age won't be able to put Steeplejack down!” ―Carrie Ryan, New York Times bestselling author
“With Steeplejack, A.J. Hartley introduces a dynamic, complex and likeable new heroine who combines wits, skill and courage to face deadly challenges in an exotic world. Teens and adults will love this book and want more, more, more!” ―Jonathan Maberry, New York Times bestselling author of Rot & Ruin and The Orphan Army.
“A.J. Hartley has created an exquisite, explosive, nail-biting, tear-rousing masterpiece, in a world so realistic it might be right around the corner.” ―Faith Hunter, New York Times bestselling author
“What a world Hartley has created! Enough twists and surprises to keep the pages turning long into the night.” ―R.L. Stine
“A unique epic adventure set in a richly imagined world; lush, exotic and masterfully written. It's Sherlock Holmes, Oliver Twist, and Indiana Jones rolled into one.” ―Lissa Price, internationally bestselling author of Starters and Enders
“Smart and socially-aware, this fabulous debut adds to the growing library of multicultural fantasy and is a loudly resounding success.” ―Nisi Shawl, Tiptree Award-winning author of Everfair
“With Steeplejack, A.J. Hartley creates a world as complex as its heroine, and a mystery that spans class, race and geography. You can feel the grit and glory of Bar-Selehm, a many-spired city teetering on the edge of the savannah, and the verge of war. The perfect setting for a street-smart young woman who is caught between three cultures, yet refuses to be trapped by them.” ―Sherri L. Smith, award-winning author of Flygirls and Orleans
“Hartley has created a world so gritty and real I could taste the soot.” ―Maurice Broaddus, author of the Knights of Breton Court trilogy
“Steeplejack combines a lively and intelligent plot with an intriguing and well-drawn world, and caps all this goodness with a determined and indefatigable heroine.” ―Kate Elliott, author of Court of Fives and Black Wolves
“A rich, atmospheric tale of adventure, morality and consequence, Steeplejack will linger with you long after you read the last page.” ―Kady Cross, author of the Steampunk Chronicles and Sisters of Blood and Spirit series
“Elegant prose, a cracking good mystery, lots of action, and characters to fall in love with and root for. I read it cover to cover in no time at all. In fact, I did so twice! And I was on the edge of my seat both times.” ―D.B. Jackson, author of the Thieftaker series
“I was completely hooked from page one. Ang is a hero to cheer for heart and soul. A thrilling, clever, meaningful read.” ―Leanna Renee Hieber, award-winning author of Strangely Beautiful and The Eterna Files
“An exquisitely built mystery set in a lush, vibrant world. I was loath to leave Ang and Bar-Selehm behind at the end of it. Definitely a book to be revisited again and again.” ―Kat Zhang, author of What’s Left of Me 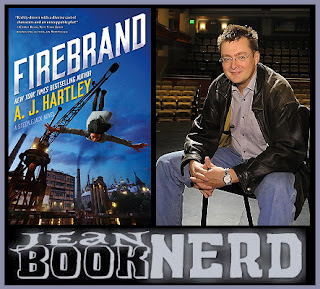 He was born in northern England, but has lived in many places including Japan, and is currently the Robinson Professor of Shakespeare studies at the University of North Carolina, Charlotte, where he specializes in the performance history, theory and criticism of Renaissance English drama, and works as a director and dramaturg.

He has more hobbies than is good for anyone, all of which you can learn more about by friending him (odious word) on Facebook, by following his blog and by checking in on the What’s Going On blog page. He is represented by Stacey Glick of Dystel and Goderich Literary Management for books, and by Eddie Gamarra of the Gotham Group for film and television. And check out A.J.’s Amazon author page.


~Sabrina
a Rafflecopter giveaway
Posted by Sabrina's Paranormal Palace at 2:25 AM