Tempted by the Storm Blog Tour

Larksong Hammerstrike has always been just the younger sister of Princess Aryanna. Never quite as pretty or as smart, always lacking, a mere empath whose power gets her into trouble more often than not. But at Carnalval, the festival of all things sexual, she unleashes her sensual side for a night in the arms of a masked stranger. When morning dawns, Lark can't resist a peek beneath the mask of her lover and is once again crushed by fate. The man of her lusty adventure is none other than the future Lord of the High Elves and destined to marry her sister. As heir to the of and current instructor of wizardry at the , Sarco Sunwalker is honor bound to rise above the temptation of the beautiful empathic student who invades his mind, body, and soul. But when sparks fly, lightning strikes, and thunder rolls, Sarco finds himself more than tempted by the storm of Lark's passion and vows to find a solution that will prevent a war between races, fulfill an infamous quest, and win Lark's hand.


There was only one word that could describe the creature standing before him. Wonderful.
“Did you say something?” the woman whispered.
He shook his head. “Nothing, I just can’t believe my luck. You really are real and here with me.”
She smiled, but her smile didn’t extend to her eyes.
Before another heartbeat passed or another breath taken, he stood at her side. With tenderness, he gazed into her gentle, masked face and took both of her hands in his. He was humbled as her fingers trembled even more than his own did. “We don’t have to do this if you’d rather not.”
She smiled wider, and her eyes gleamed with mischief. “I suppose we might as well. After all, we’re already here, and you’re at least halfway undressed.”
Sliding his hands up her arms and around her shoulders to her back, Sarco felt for and found the clasps holding her gown together. With the flick of a wrist, they gave way, and with a swish, the silky fabric fell to her hips exposing lush, rose-tipped breasts. Just the right size to hold in both hands, to fondle, to caress, to taste.
“Hmm, it seems you’re halfway undressed yourself.” 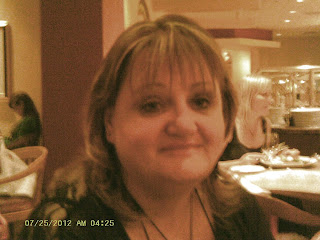 She has one very special man, his three equally special children, and their six delightful grandchildren in her life. Not to mention a very bossy African Grey parrot named Gabriel. Oh, and Gnomes! Many, many Gnomes.

Other Books:
Touched by the Magic Amazon link

Thank you to Maxine and Jenny for letting me participate in the blog tour.
~Sabrina

Posted by Sabrina's Paranormal Palace at 1:48 AM